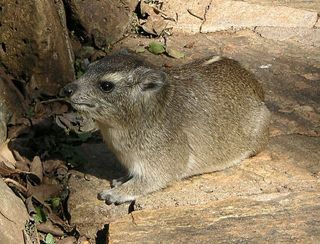 Hyraxes (Hyracoidea) is a biological order made up of four separate species of small, herbivorous mammals. The Hyracoidea order is made up of the Rock Hyrax (Procavia capensis), the Yellow-spotted Rock Hyrax (Heterohyrax brucei), the Southern Tree Hyrax (Dendrohyrax arboreus) and the Western Tree Hyrax (Dendrohyrax dorsalis). Most Hyraxes are 1 Foot (30 cm) to 2.3 Feet (70 cm) long and weigh 4.5 pounds (2 kg) to 11 pounds (5 kg).

Hyraxes are found in southern-Saharan Africa and some parts of the Middle East. They inhabit rocky areas and are equipped with sweat glands in the rubbery pads of their feet which allow them to climb large, steep, rocky mountains. In order to survive in their hot, arid environment, they are equipped with kidneys that help them retain a large amount of water.

Hyraxes are a unique order of small mammal, because they have a multi-chamber stomach which frees them from the act of chewing cud to extract nutrients from plant material. Each chamber in the stomach has symbiotic bacteria that allows them to break down plant material and also digest fiber. Hyraxes often make an antagonistic chewing motion, but this is different than the act of chewing cud, as it is not done for dietary purposes.

The Rock Hyrax feeds on grasses and broad leafed plants. Rock Hyraxes have also been known to eat small insects and grubs. The main predators of the Rock Hyrax are leopards, civets, pythons and large birds.