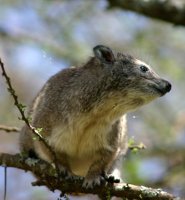 The Southern Tree Hyrax (Dendrohyrax arboreus) makes its home in the temperate forests of eastern and southern Africa. It can be found in Angola, Democratic Republic of the Congo, Kenya, Mozambique, South Africa, Tanzania, and Zimbabwe. Also known as the Eastern Tree Dassie, Eastern Tree Hyrax, and Southern Tree Dassie, it is an herbivore, favoring a variety of tree matter (leaves, shoots, and twigs), fleshy fruits, and hard seeds. They have brownish-gray fur with a creamy white patch on their backs marking the location of a dorsal scent gland. The average weight of a Southern Tree Hyrax is 2.27 kg (4.99 lb) and the average length is 520 mm (20.47 in). They have very short, stumpy tails and resemble a marmot or guinea pig in appearance. Genetically, Hyraxes are closely related to the elephant.

The Southern Tree Hyrax spends most of its time in the trees as they are very clumsy on the ground and have difficulty walking. Avoiding the ground may also be a way that they avoid some of their ground-based predators. Their dens are generally made in the hollow of a decaying tree or a nook between two branches. They are nocturnal and mostly solitary, although they can sometimes be found in pairs. They are perhaps the most distinguished for the distinctive, shrieking call of the male Southern Tree Hyrax announcing his territory. It has been described as beginning with a creaking noise, similar to the sound of tightening a ratchet, building to a crescendo, then dropping off to quieter screams.

Hyrax gestation is approximately 7 months, producing 1 to 2 (more often 2) babies. Hyraxes are weaned between 3 and 7 months of age, and sexual maturity is reached around 1 year. The lifespan of a Southern Tree Hyrax is about 10 years.

The Southern Tree Hyrax is vulnerable to extinction in the wild due to loss of habitat, though it is presently listed as "Least Concern" on the IUCN Red List of Threatened Species.

Picture of the Southern Tree Hyrax by Charles J Sharp, licensed under GFDL

Some facts about the
Tree hyrax