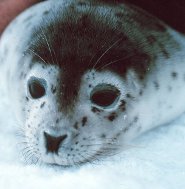 The spotted seal (Phoca largha) is a small bodied "true seal" with short flippers and a rounded head. As the name suggests, the adult coats, of both males and females, have dark spots on a light gray to silver base, though the seals are pure white as young pups. Both male and female spotted seals grow to roughly the same size as adults and are usually 1.5 meters (5 ft) long and weigh between 65 and 115 kilograms (140-200 lbs). These ice dwellers are known for forming seasonal family groups and for preferring open seas.

During the breeding season, spotted seals form monogamous pairs on the ice floes shortly before the females give birth. These pairings last for the entirety of the season, creating family groups of an adult male, adult female and a pup. Before the pair separates, they mate to conceive the pups which will be born next season. Gestation lasts for ten months, and pups are weaned at 4-6 weeks of age. The females reach maturity at 3-4 years of age, and the males are mature at 4-5 years of age. Spotted seals can live up to 35 years, so they will form many small families throughout their lifetimes.

Before the family groups separate and leave the ice floes, the pups are weaned, and they spend time learning to dive and catch prey. Juvenile Spotted Seals eat mostly krill and crustaceans, while adults feed primarily on larger fish, such as capelin, cod, herring and pollock. They are expert divers, reaching depths of over 300 meters (1500 ft) in pursuit of their prey.

Spotted seals are open water hunters, and even when the family groups are on more solid ice in the spring breeding season, they prefer shifting ice floes, rather than pack ice. In the summer they can be found in the open ocean in the sub-arctic or arctic waters of the North Pacific Ocean and adjacent seas. Spotted seals range from Alaska, through the western Sea of Japan and the Sea of Okhotsk, and through the Bering Sea.

The main threat to these family dwelling seals is climate change and diminishing ice floes, and they are classified as Low Risk-least concern on the International Union for Conservation of Nature's Red List. Populations of spotted seals in China and Russia, however, are considered threatened. Spotted seals are still hunted by people in some areas and by larger animals such as killer whales, walruses, sea lions and other predators throughout their range.

The Larga seal, spotted seal is listed as Least Concern (LR/lc), lowest risk. Does not qualify for a more at risk category. Widespread and abundant taxa are included in this category, on the IUCN Red List of Threatened Species

Namings for the spotted seal

Some facts about the
Spotted seal