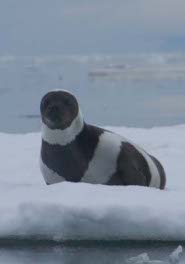 The scientific name of the Ribbon seal (Phoca fasciata) sounds like something straight from a "Lord of the Rings" genre, but the truth is, Phoca is 'seal, while "fasciata" is a band or ribbon, hence the name of this seal. The Ribbon Seal inhabits the periodically ice-covered waters in North Pacific. The Ribbon Seal actually has other names, such as: Qaqruliq or Kukupak in Yupik.

They are of medium size, if we would compare them to other ice seals. Usually they would weigh around 70kgs, while a newborn would weigh about 10.5kgs. Newborn Ribbon Seals possess a pelage of white, soft hair, and this gives them protection from the elements. First year pelage would not exhibit the usual coloration of the adults, but by the time they reach their fourth year, color would be any of 4 particular, light-hued ribbons set on dark. They can be found on the following areas: encircling head/neck, encircling trunk or at the navel areas, one at each side of its body. The measurements of the ribbons vary, and fact is, in some individuals, they merge.

They have big eyes, a bit-flat whiskers and weak teeth. A female Ribbon Seal is sexually mature from 2 to 4 years, while the males are at ages 3 to 6. The young Ribbon Seals are born on an ice setting (floes), and the nursing time frame would go from three weeks to a month. Majority of the adult females get pregnant each year.

These seals consume a wide repertoire of foods, but in general, their diet consists of fish, and walleye pollocks, in territories where this kind of prey abounds. Besides fish, they survive on shrimps, crabs and squids.

Interesting fact: One's air sac overlies its ribs at the right side, and the purpose of this structure (it is absent from its relatives' bodies) is basically a mystery. Scientists speculate that it is most probably related to vocalization when underwater.