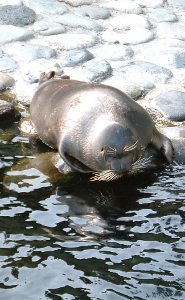 The Baikal seal (Phoca sibirica) and (Pusa siberica) is the world's only seal that lives in freshwater. It gets its common name from the vast Siberian lake where it lives – Lake Baikal. They also swim up and down rivers that connect to the lake. It is unknown just how an ocean dwelling creature like a seal found its way to a freshwater lake. Tens of thousands of years ago, Lake Baikal may have been linked to the Pacific Ocean and over time that passageway was shut off.

Baikal seals have only one known predator – humans. The vast lake and riverways support an estimated 60,000 seals. Restricted hunting seasons exist for the seals in order to keep the population to a stable level. Baikal seals suffered from a mysterious virus that wiped out about 5,000 seals. It may have been transmitted by domestic dogs, as the illness seemed nearly identical to canine distemper virus.

The Baikal seal is the world’s second smallest seal, with only Hudson Bay seals being smaller. Both males and females grow to an average length of 4.26 feet (1.3 meters). Males or bulls grow heavier than females or cows. Males tip the scales at 286 pounds (130 kilograms) while females are a more petite 110 pounds (50 kilograms.) Both bulls and cows lack external ears, but do sport ear holes. Baikal seal have silver grey backs and lighter yellowish-tan underside and neck. Some individual seals show dark spots on their backs and sides, but this is rare. Their short muzzles sport long silvery-white whiskers, which helps them navigate dark winter waters. Their forelimbs or flippers are very strong for seals. They can easily haul their bulky, whale-shaped bodies onto rocks, riverbanks or ice floes.

Baikal seals live separate lives for most of the year. Since the lake quickly covers with thick ice in winter, seals must keep near breathing holes that they scrape open with their teeth. Over the years, this quickly wears down their teeth. Seals have been observed sharing breathing holes. Pregnant cows avoid shorelines and stay on the ice for the winter. Bulls keep to the water as much as possible. Baikal seals can hold their breath for up to 25 minutes, but usually surface in less than 10.

Seals need to molt their coats in April or May and then become more sociable. They congregate in large groups of up to 500 seals. Breeding season begins in April and extends to June. Unlike many other species of seal, the Baikal breeds in the water and not on land. Cows begin breeding around 4 years of age and bulls at 4 to 7 years. Cows carry their pups for nine months and give birth to one or two pups and nurse their pups for 2 to 3 months. They also teach their pups to hunt for fish and shrimp. With luck, a Baikal seal can live to be 30.

Picture of the baikal seal by Uryah, licensed under the Creative Commons Attribution-Share Alike 2.1 Japan license.