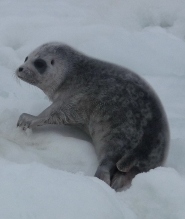 The ringed seal has a plump body with a short snout and a small head and what makes this animal unique is that it is an earless seal. Their belly has silver fur, but the rest of their coat is dark and covered on the back and sides with silver rings, which is how these seals got their name. They have small front flippers and claws that are more than 2.5 cm (1 inch) in thickness. They use their claws to make holes to breathe through the ice. These breathing holes are made through ice as thick as 2m (6.5 ft.). Their weight ranges from 45-72kg (100-160 lbs) and grows to an average length of 1.5m (5 ft.).

Ringed seals live throughout the Northern Hemisphere. The majority of ringed seals live in the Arctic Ocean, but we also find them in the Hudson Bay, the Baltic Sea, and the Bering Sea. They can be found from North America to Eurasia, and as far south as Japan, inhabiting the Seas of Okhotsk. One subspecies of the ringed seal is found in freshwater environments. The diet of the ringed seal is wide and varied. It eats small prey such as herring, shrimp, arctic cod and whitefish. It may also eat crustaceans such as perch and sculpin. They feed for polar cod along the edges of the sea ice in summer and their lifespan is 25 to 30 years. They do not like to gather in groups, and are solitary. When grouped together with other ringed seals they will separate themselves from others of their kind by long distances. When mating, the male will mate with more than one female.
Their natural predators include the Arctic Fox, polar bears, wolverines, wolves, and orcas.

While ringed seals are an annual harvest of Arctic natives, they are not endangered at this time. However, they are protected, as are all marine mammals, under the Marine Mammal Protection Act (MMPA) of 1972. In addition, the Baltic ringed seal (Phoca hispida botnica) is listed by the International Union for the Conservation of Nature (IUCN) as vulnerable.