Harp Seals Have Not a Monkey, but a Harp On Their Back 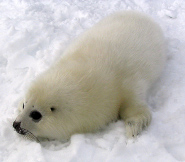 The harp seal (Phoca groenlandica) is an earless seal with a black face and a silvery-gray body. On adults, dark colored, harp-shaped markings run from the shoulders down towards the abdomen and back up again. These markings are where the harp seal gets its name. An adult harp seal can weigh about 200 to 350 pounds (91 - 159 kilograms) and reach a length up to six and a half feet (2 meters.)

The scientific name of the harp seal, Pagophilus groenlandicus, literally means ice-lover from Greenland." True to their name, they aren't seen far off of the coasts of Greenland, Russia, and Canada in the Arctic Ocean.

Harp seals are considered to be aquatic mammals. Adults spend the majority of their lives in the ocean, but they will occasionally venture onto ice floes, usually to socialize, molt, and give birth. They can dive great depths and stay underwater for an extended period of time. Since they aren't able to swim at first, baby harp seals spend most of their time on ice floes.

Harp seals are very social animals. During mating season, the adult males make quite a spectacle of themselves; they will dance to find a mate. A mature female is usually around six years of age, and during the month of February, she will give birth to one seal pup if she has mated. The babies weigh in at around twenty pounds (9 kilograms) and measure between two and a half to three feet (80 - 90 kilograms) in length. At birth, baby harp seals have a yellow coat for about three days. After three days, their coat turns to a beautiful white that stays that way for about a week. Baby harp seals are also known as whitecoats. A mother seal will nurse her pup up until about two weeks after it is born with milk that is 50% fat. Oddly enough, if the seal pup does not eat, its teeth will not grow. The weaning process is simple - she just leaves and never comes back. It is during this time that the baby harp seals are the most vulnerable.

Being a carnivore, the harp seal's diet consist mainly of marine life found in the area. Fish, eels, squid, and different crustaceans are their main sources of food.

Natural enemies of the harp seal are polar bears, sharks, and killer whales, but man has become quite a threat over the years. These seals are hunted for sport, and the baby harp seal's coats are very much sought after by hunters. Although they are not endangered yet, harp seal populations could become threatened if their killing is not monitored.

Picture of the harp seal by Matthieu Godbout, licensed under GFDL