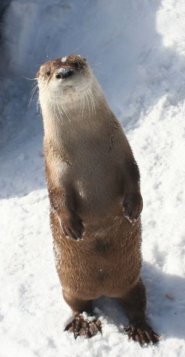 The Northern River Otter (Lontra canadensis), also known as North American River Otter, is a common sight in the waterways of North America, where it can be found in the Pacific Northwest, Alaska, Canada, the Atlantic states, and the Gulf of Mexico. They are active by day and have a streamlined, bulky physique, possessing short legs, a long tail and webbed digits. Northern River Otters have rounded, small heads and large whiskers. Their ears and nostrils are valved to keep out any water when submerged. Their pelage is shiny and brown in color, but usually, their throat is silver-gray in appearance. Not surprisingly, Northern River Otters are strong swimmers and can also move fast on land and are fond of sliding down along riverbanks all the way to the water.

In the wild, they can become ten to fifteen years of age, and under captivity, 20 years is possible.

It is very flexible animal, a Northern River Otter is capable of surviving in many kinds of habitats, such as freshwater, coastal marine, inland wetlands and even marshes. They can bear with differing ranges of temperature and altitudes, but they should be able to have access to two crucial things. First is a consistent supply of food, second is the proximity of water. Their diet consists of wide variety of things found in the water, including fish, crabs, amphibians, turtles, crayfish and other invertebrates. They can supplement their diet with birds and eggs and aquatic plants.

Akin to its cousin otters, this particular otter resides in a den, and this "home" is made in hollows, like under logs. It is recorded that they kill beavers to "conquer" their residences. These otters are playful, they slide, swim, chase, wrestle and leap. It makes them favorites to look at in zoos. They are not particularly friendly to humans if brought up in captivity, especially when they reach sexual maturity and begin acting aggressive and defensive.

While not listed as nationally endangered, they are endangered in states. Over 30,000 otter pelts are sold each year in the United States and Canada according to Wikipedia. They are also hunted by bobcats, coyotes, alligators, birds of prey and other large predators.

Interesting fact: When swimming in circles, it creating a whirlpool. This in turn forces the fish up to the surface.

Namings for the northern river otter

Some facts about the
Northern river otter