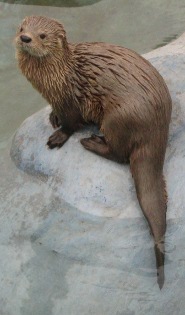 The marine otter (Lontra felina) is not to be confused with the far more familiar sea otter (Enhydra lutris). The marine otter is smaller, leaner and more cat-like. Not many marine otters live in captivity. They have much smaller natural range than the sea otter, which calls most of the Pacific Ocean their home. Marine otters can still be seen in the wild off the coasts of Chile, Peru and Argentina.

Sadly, the marine otter is an endangered species. Marine otters were heavily hunted for their brush-like, water-resistant pelts. Although they are a protected species, poaching is still a problem. Over-fishing by humans has limited their known food supplies of crabs, mussels and limpets. They also catch fish up to 23.6 inches (60 cm) long. Marine otters have been observed eating rock codling, toad fish, clingfish, morwongs and the whitemouth croaker. Individual in captivity enjoy eating fruit with their seafood, but fruit is not available to wild otters.

Marine otters possess long bodies, stubby legs ending in webbed and clawed paws and a sleek, seal-like head. Their tails appears short in comparison to the body. Males and females look alike and grow to the same size and weight. Adult marine otters grow to a body length of 45 to 58 inches (113 to 149 cm), including the tail. Adult weights vary from 6.6 to 13 pounds (3 to 5.8 kilograms).

The marine otter’s fur ranges in coloration from a coffee brown to a mousey grey. Their fur is not as valuable as for other otter species because it feels so harsh. But it needs to be harsh in order to protect the marine otters from colliding into rocks near their coastal homes. The fur has two layers, with the innermost layer shorter and softer than the outer layer. Adults often sport pale brown or grey patches underneath their chins and on their bellies. Otter pups have much darker pets, which lighten as they age.

Unfortunately, not much is known about the marine otter’s habits and behaviors. It is known that they are most active during dawn and dusk, but sleep during the night. Unlike many other otter species, marine otters wash their coats with salt water and not fresh water.

Breeding season for wild marine otters is during December and January. Female pregnancies last from 60 to 65 days and they often give birth to two pups, although liters of 4 have been spotted. Both males and females help to raise the pups. The pair digs a den on land in order to raise their family. Pups stay with their parents for ten months. The pair teaches their pups to swim, hunt, how to socialize with other marine otters and how to avoid predators such as the orca and sharks. Small pups can be plucked off the rocks and beaches by large birds of prey. It is unknown how long they live.

Picture of the marine otter by Sakura1994 at Huachipa Zoo in Lima, Peru, licensed under GFDL

The Marine otter, sea cat is listed as Endangered (EN), considered to be facing a very high risk of extinction in the wild, on the IUCN Red List of Threatened Species

Namings for the marine otter