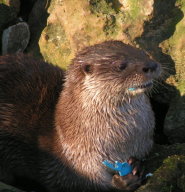 The Neotropical River Otter (Lontra longicaudis) resides in swamps, streams, lagoons and lakes in Mexico and parts of South America (especially Brazil, Bolivia, Paraguay and Uruguay). It is the most widespread of the Lontra genus.

Its head is both round and flat, ears placed low, the muzzle is just short and whisker-filled. The neck is also short, it has eyes which are widely-spaced. The best description for the nose of a Neotropical River Otter would be trapezoid-like.

The back legs are longer than the front ones, allowing them to swim adequately. If an otter is relaxed and swimming slowly, it could be seen paddling using all 4 paws, but if it is engaged in fast swimming (for example, being pursued, or chasing a prey), short paws are maintained close to its sides, the tail acts as a propeller. Its nostrils/ears could be closed when one is submerged.

Their diet mainly consists of mollusks and fish, but they are what we call opportunistic eaters, they can also eat birds, small reptiles or mammals.

This otter has no set breeding period, and just like its relative otters, a delayed implantation prior to breeding might occur. A newborn is born fully furred, but the eyes are shut, and these would open after approximately 44 days.

Interesting fact: One marks by scent via the leaving of feces on places like bridges or logs, and you know why? Experts believe this is an advertisement of one's gender.

Namings for the neotropical river otter

Some facts about the
Neotropical river otter