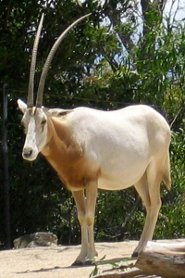 The Scimitar-horned oryx (Oryx dammah) is a species of large antelope in the Oryx genus. Originally inhabiting the steppes and deserts of North Africa, it is currently extinct in the wild. Although there were reported sightings in Chad and Niger, attempts to independently verify these claims in a survey conducted from 2001 to 2004 turned up no trace of them in the wild. Currently, around 1250 live in captivity in fenced-off areas in conservation centers as distant from each other as Texas and Morocco.

The Scimitar-horned Oryx's most notable feature are its long, slender horns, which in both the male and female can reach between one and one and one quarter meters (3.28 - 4.1 ft) in length. The horns are truly distinctive in the way they arch backward like scimitars, the Middle-Eastern curved sword from which they take their name. The average Scimitar Oryx is about a meter (3.28 ft) tall and weighs roughly two hundred kilograms (440 lbs). Its coat is generally light in color with a dark red patch on its chest, and has markings along the its nose and forehead.

The Scimitar-horned oryx's diet consists of grass, leaves, and any other wild vegetation it can find. When hundreds of herds roamed the North African steppes, its main predators were lions, leopards, and hyenas. However, it was human hunters, who sought the oryx for its horns, who drove it to the brink of extinction.

One of the more fascinating things about the Scimitar-horned Oryx is its connection to the mythological unicorn. Because their horns are not like the antlers of other related species in that they do not grow back, many mythographers have hypothesized that members of the species who lost one their horns might have been mistaken for the legendary creatures by early European explorers and colonists in North Africa. What would have added to the impression is the fact that single-horned Scimitar Oryxes are quite often ostracized from their herds, forcing them to wander the steppes alone in order to survive. To Europeans, this perfectly matched the image of the unicorn, which was known for its pride and independent nature.

Even though they are extinct in the wild, there is still hope that it will be able to be reintroduced to the wild at some point. In Tunisia, there is a nature preserve which houses a small herd with precisely this end in mind. Also, as recently as this April, the first calf in 13 years was born at the National Zoo in Fort Royal, Virginia. With luck, within our lifetime, these pro-unicorns may roam the wild again.

Picture of the scimitar-horned oryx by Albinfo, licensed under GFDL

The Sahara oryx, scimitar-horned oryx is listed as Extinct in the Wild (EW), known only to survive in cultivation, in captivity or as a naturalized population (or populations) well outside the past range, on the IUCN Red List of Threatened Species

Some facts about the
Scimitar-horned oryx