The Goral: Threatened Mountain Goat of the Himalayas 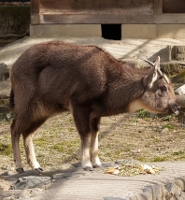 Also called the grey goral, the Himalayan goral (Naemorhedus goral) is a goat-like creature so rare that it is listed as a nearly threatened species by the International Union for the Conservation of Nature. Native people in the Himalayas find it difficult to grow crops and so exist on a meat-based diet. Gorals are hunted for meat, for their fur, for sport and to harvest parts for folk medicine that can be sold as far away as South Korea.

Nimble on the Hills

Gorals don’t make easy targets for human hunters. They can race up sheer rock-strewn slopes as easily as a cow walks across a meadow. Gorals coloration of a muted grey-brown helps them blend in with their surroundings. Unless they move, gorals are particularly hard to spot. Gorals can easily exist up to 9800 feet (3000 meters) above sea level. The oxygen is too thin for most people except the native peoples of the Himalayas.

To help their camouflage be more effective, gorals sleep during the day. They become very active around dawn and dusk. They feed at dawn on whatever vegetation they can find, including bare twigs and spend the remainder of the day laying down and ruminating. In order to digest their harsh diet, the food needs to come back up the throat, be re-chewed and swallowed again. In recent years, scientists were stunned to learn that these remarkably rare predators actively hunted gorals. Both big cats and gorals need large areas in order to survive because of the lack of resources in the mountains. One goral herd of about ten animals needs about 100 acres (40 hectares) in order to survive. This suits the big cats just fine.

Gorals are so fast and nimble that natural predators need to creep up as close as possible to one before charging. If the wind blows just right, a cat can creep above a resting goral and then race down onto the prey before it can leap up and gain momentum. Gorals have far superior powers of stamina, but are equal in speed to their predators when it comes to sprints. Gorals warn others of danger by hissing and snorting in a way that sounds to people like a sneeze.

The Goral, himalayan goral is listed as Near Threatened (LR/nt), is close to qualifying for or is likely to qualify for a threatened category in the near future, on the IUCN Red List of Threatened Species

Some facts about the
Goral