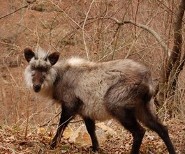 The red goral (Naemorhedus baileyi) is a species of mountain goat most known for its bright red fur. This is unusual for the goral because all other members of the Naemorhedus family have grey or brown fur, making the red goral stands out significantly due to its oddly bright fur. While the coloring is unusual, this animal has many of the same traits as its distantly related family, including long shaggy hair and a long black tuff of fur that makes up the tail. The red goral also has a single black stripe that runs from its skull down to its tail.

The red goral itself is the smallest member of the bovidae family, weighing only 20 to 30 kg (44 to 66 lbs) and with a length of 100 cm (39 in). About 16 cm (6 in) of this is made up of the horns that both male and female have. These horns are used for fighting when necessarily, though it is in the red goral typical nature to flee rather than fight. When predators, most commonly including leopards and jackals, challenge them, the goral can use its quick speed and strong climbing and jumping skills to bolt up ledges where they are unreachable to other animals. They use this technique to their advantage, feeding on grass, stems, and leaves during the day, then retreating to inaccessible cliff ledges at night to avoid the threat of predators.listofcountriesoftheworld.com/ch-animals.html" title="" rel='external'>China, though there have been reports of the species living in India and Myanmar as well. The species is currently on the endangered list, rating "Vulnerable" on the conservation scale. This means the animal is likely to become endangered unless drastic measures are taken to improve environmental conditions. The red goral is currently falling victim to habitat loss as well as hunting, and as little as 810 are feared to be alive today. The hunting, while illegal, is partly due to the bright red fur that the goral's have in comparison to their relative, which are a much duller shade. This also prevents the goral's from blending into their surroundings, which can make avoiding predators more difficult.

Despite the low number of red goral's alive today, those who are surviving tend to roam alone, or in a small pack of three. This is most commonly with a male, female, and young. If a male goral isn't present, the female will often travel with two of her young instead of just one.

Due to its "Vulnerable" status on the conservation scale, the red goral can often be seen in zoos where they are encouraged to mate with one another to help improve the number alive today. Unfortunately, their keen skill of jumping can make this difficult, as the animal has been known to jump as high as nearly 2 meters (6 ft) from a stand still. Zoo owners must be careful to watch the species to insure that none of them escape.

Picture of the red goral by Beaukarpo, licensed under GFDL

The Red goral is listed as Vulnerable (VU), considered to be facing a high risk of extinction in the wild, on the IUCN Red List of Threatened Species

Some facts about the
Red goral