The Blue wildebeest - lawnmowers of the grasslands 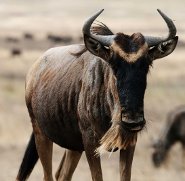 The Blue wildebeest (Connochaetes Taurinus), one of two species of wildebeest, is a large mammal of the Bovid family. Muscular in appearance, this animal moves gracefully on slim legs. Although he has a reputation for stampeding, this animal generally moves quietly, but when spooked can charge across the plain at speeds up to 40 mph.

The silvery, blue luster on his short-haired hide, differentiates him from the plainer, Black wildebeest, and also gives him the distinction of his name. Parenthesis shaped horns adorn the heads of both the male and female wildebeest. Wide at the base while curving out and upward, the male’s horn span can reach 90 cm, 2.95 ft, with the female horns only half that size. Larger than the female, the male can reach a length of 2.5 meters, 7.5 ft, and a weight of 290 kg, 639 lbs, with the female slightly smaller.

Since wildebeests must have daily, lengthy drinks, they should always be within 15 to 25 kilometers of potable water. Because of their need to drink, wildebeests are extremely vulnerable at river crossings. There, they are stalked by their enemies. The main predators of the wildebeest are the crocodile, lion, leopard, cheetah, and the hyena. Because wildebeests are grazers they prefer the grasslands of the savannah. Their diet consists mainly of short grass, but sometimes they may eat bark and leaves. The jaw structure, and their wide rows of teeth, prevents them from eating many of the longer types of grasses, compelling them to choose shorter growth. Zebras co-exist with the wildebeest for joint protection, and also allow the wildebeest to benefit from the Zebra’s grazing habits of shearing down tall grass, leaving the choice, shorter shoots behind.

While the herds are mostly migratory, they will follow a seasonal grazing and watering path. Forming some of the largest migratory herds of all animals, the wildebeest will search for more lush grasses once the rainy season has ended. Yet, some wildebeest do not migrate, and prefer to stay in one area year round, forming small herds. Very territorial, the adult males will occupy their piece of ground for a month, or for the whole year, marking the space with dung heaps, gland secretions, and pawing of the ground. Generally, territories cease to exist once the dry season begins.

Africa’s large herds of wildebeest have declined the last few centuries because of human habitat, hunting, and environmental droughts. Fencing, and lack of water due to irrigation and farming, has prevented the wildebeest from migrating and entering its usual seasonal ranges. The Blue wildebeest still numbers over a million, and continues to be wide spread throughout Africa. However because of their diminishing numbers, and fear for their survival, conservation efforts are working to repair damaged grasslands and the problems of excessive fencing.

Picture of the Blue Wildebeest by Profberger, licensed under Creative Commons Attribution 2.5 Generic

The Blue & white-bearded wildebeest, blue wildebeest is listed as Conservation Dependent (LR/cd), the focus of a continuing taxon-specific or habitat-specific conservation programme targeted towards the taxon in question, the cessation of which would result in the taxon qualifying for one of the threatened categories below within a period of five years, on the IUCN Red List of Threatened Species

Some facts about the
Blue wildebeest