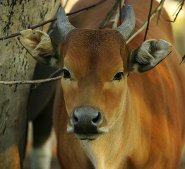 The banteng (Bos javanicus) is an ox similar in size and proportion to domestic cattle, but with a smaller head and more slender neck. Mature banteng stand 61" to 65" (1.55 to 1.65 meters) at the shoulder, and weigh 1,300 to 1,800 pounds (600 to 800 kilograms). Both male and female banteng have white rumps, stockings, ear tufts, muzzles, and spots above their eyes. The color of their horns ranges from bright white to brown with very dark tips.

Bulls are black or dark brown at maturity, although they are born a lighter shade of reddish brown. Their horns, measuring 24 to 30 inches (60 to 75 centimeters) in length at maturity, are horizontal at the skull and curve upward to vertical as they grow. What makes the bull appear so extraordinary is the horn-like patch on the forehead which seems to join the two horns, creating the look of a stereotypical Viking headdress.

The cow is lighter brown with a dark brown stripe along her ridge. Her much smaller horns emerge from the skull at a higher angle without the horn-like patch between, curve outward only slightly, and then turn inward at the tips as she matures, as though to create a halo.

Banteng, like all oxen, are herbivorous and feed on grasses, fruit, bamboo, and leaves found in the grassy forests or prairies. In the wild, banteng live in small herds of two to forty cows and one bull. Reproductive herds are usually dominated by an experienced cow. Rejected bulls often live together in all-male herds.

The life cycle of the banteng proceeds at a leisurely pace befitting such a docile creature. The gestation period is 265 days.. Calves are weaned at about six to nine months, and sexual maturity occurs at two to three years of age with domestic animals maturing faster than wild ones. Wild banteng have an average life span of about eleven years while domesticated banteng can live well past twenty years.

Native to Southeast Asia, specifically Java, Borneo, Bali, Myanmar, Thailand, Laos, Vietnam, and Cambodia (it is the national animal of Cambodia), almost all remaining banteng, about a million and a half, are domesticated work animals or livestock in their native regions. Only a few thousand live in wild herds in their native habitat. Of these, the Burma Banteng (B. j. birmanicus) subspecies is classified as Critically Endangered. Several hundred bulls and cows representing all three subspecies are protected within wildlife sanctuaries around the world. Other than mankind, their primary predators are the dhole, and to a lesser extent, tigers.

And then there is the Australian banteng. Twenty head of banteng livestock were brought to Australia in 1849 to provide meat for a newly established British military outpost in the Northern Territory. Just a year later the outpost was abandoned, and the banteng were released into the wild. Over the next hundred and seventy years, this feral population increased to perhaps as many as fifteen thousand on the Cobourg Peninsula, becoming a favored trophy of hunters from around the world as well as a food source for the local population.

Today much debate centers around the Australian banteng. Should they be eradicated to allow the environment to regress to its natural state? Should they be reintroduced to the Southeast Asian herds to augment the endangered native herds? Should they be left in place and accepted as a beneficial element of the current regional ecosystem? More study and monitoring are needed to determine the biological, ecological, and economic risks and benefits of the various proposals being considered.

It is believed that the banteng originally descended from domestic cattle. For centuries they have been crossing and recrossing the line between domestic and wild. Both the domestic and wild populations have important economic and ecological roles within their regions.

The Banteng, tembadau is listed as Endangered (EN), considered to be facing a very high risk of extinction in the wild, on the IUCN Red List of Threatened Species

Some facts about the
Banteng