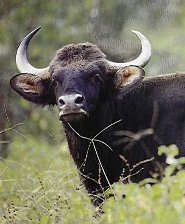 The Gaur (Bos frontalis) is a big relative of the cow, being a bovine itself, and is the largest known wild cattle on the planet – in fact they are bigger than bison, water buffalo, and the Cape buffalo. They are found in south Asia, and are particularly vulnerable. In fact, they are listed as a threatened species, and if more is not done to prevent their population loss, they will become endangered soon. They have a high ridge on their forehead between their horns and back has a ridge that is marked and raised with their body length being around 250 to 360cm (8-12 feet), and they typically stand as high as 220cm (7.2 feet) although the males typically are taller than females. They have big ears, smallish tails which average 70 to 100cm (28-40 inches), and a noted pattern of hair loss on their backs in males as they age. As adults they are very dark in color, being a dark brown to black – and darkening with age. Their heads from the eyes to the neck is an ashen gray and sometimes lighter, while their muzzle is a pale color. Their legs, from the knees down, are white. Adolescent and young Gaurs are usually lighter and paler in tone, and gradually darken with aging. Males typically weigh close to 1500kg, with a range of 1000-1500 being considered normal (2200 – 3300 lbs), while females being smaller and lighter weigh 700 to 1000 kg (1500-2200 lbs).

As they are the heaviest, and most powerful of all wild cattle, they hold a special place as the apex bovine, and their ecological role provides an important food source for only one large apex predator which is known to have killed a healthy adult – that being a tiger. Even then, there are more cases of tigers being killed by Gaurs, than Gaurs being killed by tigers. The males of the species are extremely muscular, and powerful – able to generate enough power to be deadly to predators, humans, and other domestic cattle that are unfortunate enough to provoke them. They live in herds of around 30-50 members, and they gestate for around 280 days. Herds are typically led by the oldest female, while males are mostly nomads that wander in search of females. In the herd the young are typically protected fiercely, as the large adult females will form a circle with heads and horns facing outward to protect the young from possible attack by tigers. An unusual behavior observed when a tiger was sensed by a herd, and they formed in an ancient human military tactic called a phalanx, and drove it off in a steady march toward the unfortunate tiger while lined up.

Picture is of the Indian Gaur, by LRBurdak licensed under GFDL

The Gaur, indian bison is listed as Vulnerable (VU), considered to be facing a high risk of extinction in the wild, on the IUCN Red List of Threatened Species

Some facts about the
Gaur