The Yak – Don’t talk back 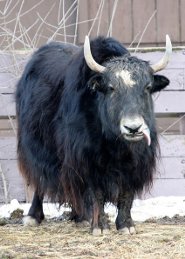 The Yak (Bos grunniens)is listed as a threatened, near-endangered species by the IUCN, and has a likely chance of going extinct this century, although this endangered populations is almost identical to the domesticated yak, however many domesticated yak are crossbred with domestic cattle and not true yaks. The wild yaks are decreasing in population and may become extinct in the wild, while the domesticated yaks are likely to live on indefinitely. In the wild the yak is a herd animal that usually lives in groups of 10-30 animals; however larger herds have been seen. They can weigh up to 2,500lbs in the wild (1200kg) and are adept at living in high altitude habitats which range from 10,000 to 18,000 feet (people acclimated to sea-level elevation who experience cabin decompression in an airplane at 18,000 feet in altitude will succumb to hypoxia in ~20 minutes). Their fur is matted by a specialized sweat, and their coloration is usually brown, black, and some domesticated varieties are white.

They usually are pregnant for 9 months and give birth every other year or in three year cycles, additionally they can live past 20 years of age. Their physiology (blood, lungs, etcetera) is very adapted to living in the high elevations as well as their diet. They have very efficient lungs and much larger lungs than related domestic stocks, and their matted hair provides excellent insulation. Their diet consists of mostly lichens and grasses, along with other available plant matter. Their horns are usually white, and curved inward, while their faces are dark except around the nose and occasional patters between the eyes. Due to their ability to provide food for humans, the wild yaks are often hunted, while the domesticated (and much smaller) yaks are used for milk, and meat, along with being a sort of transport. Once domesticated, the yak became much smaller, having nearly half the weight and size of their wild brethren, and this stock of yak, as mentioned is not in danger of extinction.

The yak’s binomial name and species is Bos grunniens, belonging to the Genus Bos. Within the Bos genus, there are many living relatives, and some extinct known relatives; of the living there are cattle (cows), guars, the Grey Ox, and more. Bos belongs to the Subfamily Bovinae, which has ten different genera, including species like the four-horned antelope, the buffalos, the Kting Voar, Bison, and others. Bovinae belongs to the Family Bovidae, of which all members are called bovids. Bovids include cattle, antelopes, sheep, goats, muskox, wildebeest, and many more. Bovidae belongs to the Infraorder Pecora, which has giraffes, musk deer, pronghorns, and deer along with more. Pecora belongs to the Suborder Ruminantia, which includes two Infraorders, with Tragulina being the other, and having just 6 living species, and many extinct relatives. Ruminantia belongs to the Order Artiodactyla, otherwise known as even-toed ungulates, meaning they either walk on two of their digits (such as camels), or four of their digits (such as pigs, and red deer); within this large order there are four suborders, like Cetancodonta with just hippos (and possibly the whale), Tylopoda with just the camels, and Suina with peccaries and pigs. Although that does not seem very large, there are also 26 known extinct families within the suborders when combined. Artiodactyla belongs to the Superorder of Laurasiatheria, and within this reside many species of mammals and many orders, such as the bats, the carnivores, and the odd-toed ungulates. Laurasiatheria belongs to the Infraclass Eutheria which is the living placental mammals and their extinct relatives. Eutheria belongs to the Subclass Theria, of which all mammals with the exception of the monotremes are members of.

Interesting Facts about the Yak

The Yak’s sweat is a specialized sticky substance that allows for the hair to be very matted and to keep the yak warm, however it is also used in traditional Tibetan medicine.

Domestic Yak can be used to make clothing, as their hair is soft and smooth and can be turned into yarn and then knitted into clothing, rugs, ropes, and many more fiber-based products.

The Wild yak, yak is listed as Vulnerable (VU), considered to be facing a high risk of extinction in the wild, on the IUCN Red List of Threatened Species

Namings for the yak

Some facts about the
Yak