Hartebeest - At Home on the African Range 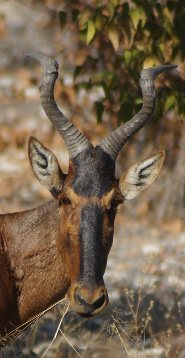 Hartebeests (Alcelaphus buselaphus) are the African antelope. Had Dr. Brewster M. Higley, who wrote the poem "Home on the Range," visited Africa, the poem might well have said: "Home, home on the range, where the deer and the hartebeests roam." In 1876 when Dr. Higley penned the now famous poem, it ranged the entirety of Africa from Morocco and Egypt in the north, to South Africa, Nambia, and Botswana in South. Now, due largely to the extinction of the Bubal Hartebeest that grazed the grasslands and forests of Northern Africa, hartebeests are no longer found in the north.

The word hartebeest is derived the Dutch word for deer, hertebeest. In general, they stand nearly 5 feet at the shoulder (1.5m) and weigh between 265-440 lbs. (120-200 kg). Their body style is more muscular than other antelope with high withers and sloping hindquarters. Their elongated head gives them a horsey countenance.
Both males and females have horns that can extend as long as 27 inches (70 cm).

The shape of the hartebeest's horns is one way to determine the specific subspecies. There are three basic horn patterns for the hartebeests:

The Common hartebeest, hartebeest is listed as Conservation Dependent (LR/cd), the focus of a continuing taxon-specific or habitat-specific conservation programme targeted towards the taxon in question, the cessation of which would result in the taxon qualifying for one of the threatened categories below within a period of five years, on the IUCN Red List of Threatened Species

Some facts about the
Hartebeest