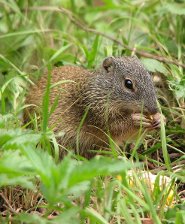 The Franklin Ground Squirrels (Spermophilus Franklinii) are mostly found in tall grass prairie in northern parts of America. They also occur in Ontario's southwest parts, Central Kansas Central, and some parts of North Dakota. They are also found in far Eastern and Central Indiana, and the north-west areas of Lake Michigan on the adjoining parts of Michigan City and Chicago. Franklin Ground Squirrels are also seen in central Minnesota and southern Wisconsin.

These squirrels live on the borders of wooden vegetation and grassy areas due to the availability of different food sources. Since these squirrels prefer dense vegetated regions, they are rarely seen in cities.

The weight of a Franklin Ground Squirrel is about 340-950 grams (11.97 oz -33.44 oz). These squirrels are larger than other ground squirrels. The total length of their slender and elongated body is about 35.5 - 41.0 cm (13.97-16.14 inches), with tail measuring 12 - 16 cm (4.72-6.22 inches). The salt-and-pepper colored body of this ground squirrel is quite short and it has black and white bands on their hair which make the head and tail look grayish. The color of its feet is pale gray and ears are short. Males tend to have more weight than females and there is a significant change in weight in summer and winter. In spring, a male may weigh up to 370 - 500 gram before going into hibernation but when they emerge from hibernation, they may reach up to 570 - 950 gram in weight.

Both female and male Franklin Ground Squirrels reach reproductive maturity at the age of 327 days. There is great competition among males to pursue a female for courtship. The musky charges released from the anal glands attract the female for mating. By mid-April, the mating process for reproduction is over. The gestation period lasts for 28 days. The young ones take birth in May or sometimes, even in June. A litter of Franklin Ground Squirrels contains 5 to 10 young and there is only one litter per year. At birth, the young are without fur but after ten days, tiny hair on their body is visible. After 20 days of birth, the young ones open their eyes and within 30 days, they become capable of venturing outside themselves. They become almost mature by winter.

Unlike other squirrels, Franklin Ground Squirrels do not make much noise or show any curious action, they are comparatively inconspicuous. When alarmed, unlike their other family members, these squirrels do not usually stand in upright position, but take refuge in burrows instead. On sunny, bright days, these squirrels are found to be most active. Only 10% of their time is spent above the ground and they dig burrows in the ground as deep as 8 ft with many openings and branches.

The Franklin's ground squirrel is listed as Vulnerable (VU), considered to be facing a high risk of extinction in the wild, on the IUCN Red List of Threatened Species

Namings for the Franklin

A young / baby of a Franklin is called a 'pup, kit or kitten'. The females are called 'doe' and males 'buck'. A Franklin group is called a 'dray or scurry'.

Some facts about the
Franklin's ground squirrel