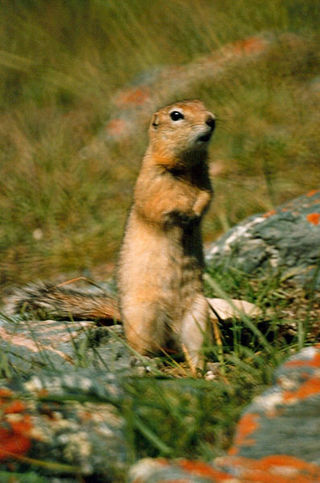 Picture has been licensed under a Creative Commons Attribution ShareAlike license
Original source: Own work. Transferred from http://ru.wikipedia.org/wiki/????:??????_?????????????.jpg
Author: Cherttod

The Long-tailed ground squirrel is listed as Least Concern (LR/lc), lowest risk. Does not qualify for a more at risk category. Widespread and abundant taxa are included in this category, on the IUCN Red List of Threatened Species

Namings for the longtailed ground squirrel

Facts about the long-tailed ground squirrel

Ca-ATPase activity in sarcoplasmic reticulum (SR) membranes isolated from skeletal muscles of the typical hibernator, the ground squirrel Spermophilus undulatus, is about 2-fold lower than that in SR membranes of rats and rabbits and is further decreased 2-fold during hibernation.

Shpilenok The long-tailed ground-squirrel is a prominent resident. (Full text)