The Great Gerbil - A Natural Grocer 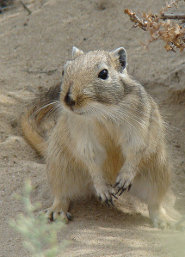 The Great gerbil (Rhombomys opimus), is not a critter to be trifled with. Far and away unlike the gerbils found in pet stores, the great gerbil can grow to 16 inches (40.6 cm) and achieve a weight of .0627 pounds or .0285 kg. A world traveler, the great gerbil has been found in a variety of countries, climates and habitats. This animal is one hardy rodent who gets around. Populations of great gerbils exist in China, Russia, Turkmenistan, Kazakhstan, Iran, Southern Mongolia, and Afghanistan. It's a desert-dweller for the most part, but the great gerbil easily adapts anywhere.

Its scientific name, Rhombomys opimus, literally means "rich rhomboid mouse" because of the appearance of its teeth and the way it stores its food. Hoarders, the great gerbil stockpiles large quantities of groceries, foraging at dawn and dusk. If they can easily dig through the soil, they will bury their provisions to keep them safe. But in areas where the ground is rock-hard, they create little piles outside their nests. According to National Geographic, "Piles of food up to three meters across and a meter high have been recorded." (That's about 9 feet across and 3 feet high, quite a pantry).

The great gerbil is also a talented burrow-builder. Most likely they build strong burrows to protect their food stash, but also their families. They are gregarious animals, living in large extended families. A group of gerbils is called a "horde", a fitting name for animals who hoard their food.

These animals migrate often, always searching for more and better food. The burrows they leave behind become shelter for a variety of other animals that have been found living as squatters in an abandoned great gerbil burrow. Small mammals, birds, and insects have all been discovered living in gerbil burrows, which can be long and complicated in soft soil. Their traveling habits explain why they are found in so many countries. Their relentless search for sustenance has caused these gypsy gerbils to be listed as pests in many parts of the world. Especially for farmers and people who make their living in agriculture, the great gerbil is not so great for their livelihood. They destroy crops and damage irrigation systems, soil embankments and fields. Their enemies are any reptile, mammal or raptor fast enough to catch them, and humans who trap them for their fur and to eradicate them from managed vegetation.

Picture of the great gerbil at Baikonur-town, Kazakhstan by Yuriy75, licensed under GFDL

The Great gerbil is listed as Least Concern (LR/lc), lowest risk. Does not qualify for a more at risk category. Widespread and abundant taxa are included in this category, on the IUCN Red List of Threatened Species

Namings for the great gerbil

Some facts about the
Great gerbil