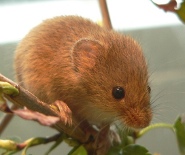 The Eurasian harvest mouse (Micromys minutus) is nature's miniature master of camouflage. Though tiny, it's a slow-moving mouse, and it has many predators, among them owls, foxes, cats, and weasels. When the mouse feels under threat, it adopts a defensive posture by remaining motionless, effectively camouflaging itself against the backdrop of its surroundings.

The Eurasian harvest mouse is widely distributed over Europe and Asia. Since this little mouse is remarkably adaptable and can be found in Great Britain, throughout Russia, and all the way to Japan, it isn't considered endangered. Micromys minutus thrives in many types of habitats, from grasslands and wetlands to bamboo stands. If human development encroaches on its natural habitat, this little mouse can make its home in people's gardens or even in drainage ditches.

An adult Eurasian harvest mouse weighs from 5-9 grams (.176-.316 ounce) and reaches a length anywhere from 50-70 mm (2-2.75 inches). Its body is covered in thick, soft fur, which is buff or reddish-brown in color. The mouse has a naked tail, roughly the same length as its body. The tail is semi-prehensile and allows the mouse to easily climb grass stalks and find seeds to eat.

The Eurasian harvest mouse's diet, like its range and habitat, is varied. Its primary fare is grass, seeds, and berries, but in summertime, it eats insects and larvae and sometimes feeds on fungi and moss. It likes to feed in cornfields as well, but farmers don't worry too much about its impact. The mouse doesn't eat enough vegetation to cause major problems, and it actually helps out farmers by eating insects that damage crops.

A round-the-clock rodent, the Eurasian harvest mouse is active throughout the day and night on three-hour cycles. It spends half an hour eating, then it sleeps for the remainder of its cycle. In winter, Eurasian harvest mice don't hibernate. They either build nests out of shredded grass or they congregate in barns or grain silos.

The female Eurasian harvest mouse gives birth to her litter in grass nests constructed approximately 100 cm (39 inches) aboveground. Baby mice that are only three days old can already hang onto grass stalks. The lifespan of Micromys minutus in the wild is short. They're lucky to make it to eighteen months old, and many only make it to six months. In captivity, however, these tiny mice have lived to be five years old.

The Eurasian harvest mouse, harvest mouse is listed as Near Threatened (LR/nt), is close to qualifying for or is likely to qualify for a threatened category in the near future, on the IUCN Red List of Threatened Species

Namings for the Eurasian harvest mouse

Some facts about the
Old World harvest mouse