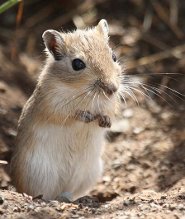 The Tamarisk gerbil (Meriones unguiculatus) is also known as Mongolian or Tamarisk Jird and also called 'sand rat'. These small burrowing desert rodents have long hind legs used for leaping and running away from predators. They were named by Milne-Edwards.

Tamarisk gerbils normally have 15-18 centimeters (6-7 inches) head measurement, and their furry tails can extend up to 15 centimeters (6 inches) and are bushy towards the tip. These cute animals are preferred pets due to their gentle temperament. These social creatures vary in coat’s color from Yellow to Sandy or Gray or Dark Brown otherwise a classier Golden Agouti, Black, Argente, Lilac, Dove, Sapphire, Silver or Ivory Cream and others.

However, it was not until 1954 when they became popular pets but prior to that they roamed the deserts and steppes of different regions in the world. While these rodents are natural carriers of plagues and diseases, they are kept as pets and used as experimental animals. Like the Hamster, they are used for research or scientific testing.

These animals are abundant everywhere from the Mongolian desert, to the Russian Federation, Kazakhstan, Kyrgyzstan, Tajikistan,Turkmenistan, Uzbekistan and also in China. However, while considered rare in some areas they are not definitely considered endangered. However, the possibility of extinction may depend greatly on habitat degradation, water loss or droughts and least likely on human disturbance.

These animals do not usually grow in colonies but normally live in family groups. The female gerbil usually gives birth up to 3 times per year. They thrive on grassland, scrublands, desert, plantation and terrestrial areas. They survive on cold and dry winters and also on hot summers. Those family groups of gerbils who live in deserts may grow in extinction due to trampling of camels and other large animals.

These intelligent mammals live in burrows with around 10-20 exits. These exits provide a way of escape for their common predators like snakes and birds of prey. Tamarisk gerbils in the wild feed on seeds and vegetation, domesticated gerbils on the other hand may be fed with food mix usually labeled as hamster and gerbil food.

The Mongolian jird is listed as Least Concern (LR/lc), lowest risk. Does not qualify for a more at risk category. Widespread and abundant taxa are included in this category, on the IUCN Red List of Threatened Species

Some facts about the
Mongolian jird