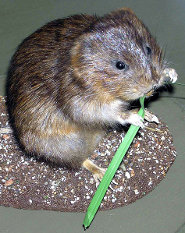 The European water vole (Arvicola terrestris) was considered a separate species from Arivicola amphibius until 1857. At that time the two were found to be the same species and is generally referred to as Arivicola amphibius. It is found all over Great Britain, north and central Europe and in parts of Russia digging nests in the banks of streams, slow moving rivers and other waterways. Their nests have many rooms, and some are used for food storage for the long winter.

The cute aspect and busy nature of the water vole has captured the imagination of authors and their public. Ratty, the main character in The Wind in the Willows by Kenneth Grahame was actually a water vole. Also, in Stella Gibbons’ comic novel and film Cold Comfort Farm one of the characters talks to water voles throughout the story.

They prefer to live in thick riparian vegetation which protects them from predators when they are above ground. They don’t like trampled grass or trees where predators can hide. The American mink was the main predator and almost hunted the voles to extinction (see also this article). They are protected now in the UK and are on the International Union for Conservation of Nature (IUCN) list as Least Concern. They have chubby faces and bodies and are excellent swimmers and divers. They grow to 5.5-8.7 inches (140-220 millimeters) long plus a tail of 2.2-2.8 inches (55-70 millimeters). Adult water voles weigh from 5.6-12.3 ounces (160-350 grams). Babies must grow to 4.9-6.0 ounces (140-170 grams) to survive the first winter.

Pregnancy is 21 days and a litter may contain up to eight babies. Each one weighs about 0.4 ounces (10 grams). They open their eyes three days after birth and can expect to live two years. Most water voles do not live through a second winter.

They eat grass and plants that grow near water and sometimes bulbs, twigs, buds, roots and fruits. When there is no apparent reason, because there is enough food available, they can destroy the grass of a whole field like a plague. They will eat voraciously leaving it bare. They have even been known to eat frogs’ legs in Wiltshire, England. They do this possibly to make up for a lack of protein in their diet.

The European water vole is listed as Least Concern (LR/lc), lowest risk. Does not qualify for a more at risk category. Widespread and abundant taxa are included in this category, on the IUCN Red List of Threatened Species

Some facts about the
European water vole