The Bonobo - The Most Sexual Active Apes on Earth 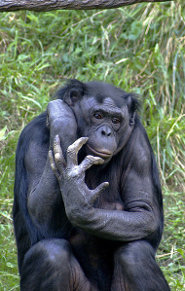 The bonobo (Pan paniscus), is one of the closest relatives to humans along with the chimpanzee. Once called the Pygmy chimpanzee, they live in only one country in the world, the Democratic Republic of Congo. These unique and fascinating creatures of the Congo basin rainforest are an endangered species with only about 5,000 remaining in the wild. The average male bonobo weighs approximately 43 kg or 95 lb, and the average female weighs 37 kg or 82 lb. Heights are 78 cm (31 inches) and 73 cm (29 inches) respectively.

Bonobos sleep in the treetop canopy of the rainforest and do most of their feeding there as well; although, they have been known to forage on the forest floor if necessary. The bonobo diet consists mostly of fruit, but also includes eggs, fungi, and other plants.

These remarkable simian creatures have earned their nickname as a result of their colorful sex lives. Unlike other simians, the bonobo female genitalia is tilted forward much like that of a human female. Because of this, bonobos are capable of face-to-face sex (and any other position, for that matter) much like humans. It is the habit of the bonobo to have sex at least once a day, but frequently several times per day. Unlike any other mammal or primate, bonobos engage in recreational sex, not just the reproductive kind. They have been observed engaging in oral sex, group sex, and deep kissing. They often gaze into one another’s eyes during sex in ways that are impossible for other mammals due to physical limitations.

Bonobos resemble human structure physically more closely than any other primate. Their legs are longer, arms shorter, ears smaller and have a more open facial structure than other simians. This coupled with the structure of the female genitalia mentioned above; make them the closest human relative in the animal kingdom.

Bonobos have no real natural predators except for humans. Although it is illegal to hunt bonobos, many hunters in the African Congo do so anyway. Some people capture infant bonobos to sell to humans as pets. The nearly constant war in the Congo region has also been a factor in the near extinction level of bonobo population numbers.

Many people have never heard of a bonobo and do not know of their endangerment. Get educated and get involved to help preserve this unique creature.

Picture of the bonobo by Kabir Bakie at the Cincinnati Zoo May 2005, licensed under Creative Commons Attribution-Share Alike 2.5 Generic

The Bonobo, dwarf chimpanzee, gracile chimpanzee, pygmy chimpanzee is listed as Endangered (EN), considered to be facing a very high risk of extinction in the wild, on the IUCN Red List of Threatened Species

Namings for the bonobo or pygmy chimpanzee

Congo and Democratic Republic of the

Some facts about the
Pygmy chimpanzee or bonono