A Big-eyed Baby - The Small-Eared Galago 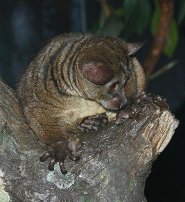 These are one of the more popular families of primates because the long furry tail and big eyes give them the look of a child's stuffed toy. The Small-eared Galago is one of the larger bush babies averaging 620 mm (42 in) long, with more than half of the length being its tail! It is reddish-brown to grey in color with a contrasting black, white, or brown tip on the tail. The male is slightly larger than the female, weighing about 907 grams (2 lbs) when grown. Galagos can live up to 15 years.

Galagos are native to several African countries, including Tanzania, Kenya, and Somalia. Their habitats are forested areas where they live in the middle to high canopies, and travel by leaping energetically from tree to tree.

Bush babies are nocturnal and feed primarily on fruit and insects. They contribute to the ecology by keeping the insect population down, and spreading seeds throughout their range, which aids in plant diversity and survival. The only known predators for the Galagos are the Genet, a small cat-like creature, and possibly large snakes. They are not considered in any danger of extinction. The infants also produce a clicking call to communicate with their mothers. The females have only one baby at a time, and are the primary caregivers. Galagos become sexually active when 20 months old, and the gestations period is 130 days. In the wild, breeding season seems to be between August and October each year.

Bush babies do not form families; they do not bond for life like other animals. Both sexes are very promiscuous, having multiple partners over their lifespan. Perhaps because of the competition involved in this behavior, the Galagos do not live in bands or families. Each male and female has his/her own range that does not overlap with the same sex. Males tend to have larger ranges, overlapping the females.

The family of Galagos have become a staple of most zoos and animal preserves even though they are in no danger of extinction. Their cute appearance makes them well liked by children, resulting in the production of stuffed toys and related items that produce needed income. Perhaps in this way they also contribute to the ecology, enabling zoos to focus resources on animals more in need of assistance.

Some facts about the
Small-eared galago