The Red Uakari - A Monkey On The Move 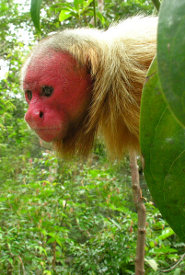 The Red Uakari (Cacajao calvus), with its bald head, crimson visage, wide eyes, short tail, and shaggy coat, probably looks like a monster to those fortunate enough to see one in the wild. In reality, this highly intelligent South American monkey is one of more than 1100 animals currently listed on the International Union for the Conservation of Nature and Natural Resources' Red List of Threatened Species.

Red Uakaries can be found in the jungles of Peru, Brazil, and Columbia, where they live in groups of 5 to 100 known as troops. Uakari troops don't just hang around all day, eating the insects, seeds, and fruits which make up their diet. Indeed, these highly social primates are also avid travelers, often covering as much as 4.8 kilometers (2.98 miles) per day. Uakaries are extremely agile creatures who can use their 15 cm (5.9 in) prehensile tails to hang from trees, and can jump as far as 20 meters (65 feet) from branch to branch.

The Red Uakari is a relatively small animal, reaching lengths of roughly 58 cm (23 in) and rarely weighing more than 4.1 kg (9 pounds). Despite its diminutive size, the animal's bright red face and thick coat of red or white fur give it an imposing look which may help frighten off indigenous predators like the ocelot, the boa constrictor, and the harpy eagle. Many scientists believe the Red Uakari's distinctive appearance also helps other members of its troop spot it in the dense, shadowy foliage of the Amazonian jungle. Others theorize that their colorful faces serve as a sign of good health to attract potential mates, since wild animals suffering from malaria and other tropical diseases often have very pale skin.

The IUCN currently lists the Red Uakari as "vulnerable", due to hunting and loss of habitat. Over the past three decades, the number of Red Uakaries living in the wild has declined by nearly 30%. The good news is that the species' conservation status has actually improved over the last decade and a half. In 1994, the Red Uakari was listed as "endangered", meaning IUCN studies showed a high risk of extinction. In 2006, however, the Red Uakari was upgraded slightly to "threatened", indicating a likelihood of becoming endangered if conditions did not improve. The "vulnerable" classification was applied to the species in 2008.

Despite the ongoing efforts to protect the species which have resulted in these upgrades, the number of Red Uakaries living in the Amazon basin continues to decline. If stronger conservation measures are not enacted to protect its natural habitat, this colorful monkey may once again face extinction soon.

The Bald uakari, bald-headed uacari, red uakari, red-and-white uacari is listed as Near Threatened (NT), is close to qualifying for or is likely to qualify for a threatened category in the near future, on the IUCN Red List of Threatened Species

Some facts about the
Red uakari