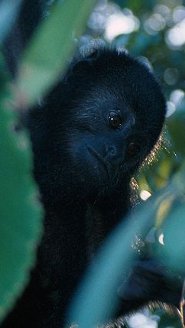 The endangered Guatemalan Black Howler (Alouatta pigra) (sometimes called the Yucatan Howler or Yucatan Black Howler) is one of many species of howler monkey, which is what is known as a ‘New World’ monkey. Its range is throughout the Yucatan Peninsula, and includes the areas of Mexico, Belize, and of course Guatemala. The Guatemalan Black Howler prefers to live in very lush areas, mostly sticking to all types of rain forests such as the semi-deciduous, lowland and evergreen. Of its cousins and relatives, the Guatemalan Black Howler is the largest, and is also one of the largest ‘New World’ monkeys (which include marmosets, owl monkeys, sakis, spider, and woolly monkeys). It weighs in at 25 lbs on average in males (11-12 kg) and 14 lbs for the females (6-7 kg). Their fur is usually black and their tails are very long, and prehensile (meaning it can grab and be used to hang from branches with). They also have specialized teeth for their diet of mostly leaves, along with the males possessing a larger hyoid bone located near the vocal chords, which enables their loud calls.

The Guatemalan Black is a diurnal howler, which means it is active during the day and it sleeps at night, as well as being arboreal, meaning it dwells in the trees most of its life. They are a social species that lives in groups up to ten members strong, which helps in alerting, foraging, and general upkeep through grooming. Some groups can be as large as sixteen, while larger groups are plausible, however at these sizes it is unlikely to function as well as a smaller group. Their diets consist of mostly leaves, and fruits, however they will snack on a flower here and there and their favorite tree of all is the breadnut, which provides most food during some seasons.

Not a particularly active species, the Guatemalan Black Howler would rather lounge about during the day; eating takes up a quarter of the day while moving locations for eating consists of only about a tenth of their daily activity. The rest of the day is devoted to socializing and grooming, with some other random antics. Females are old enough to have offspring by four years of age, while males may take up to eight years to reach maturity, and their total life-spans are an average of twenty years.

The Guatemalan Black Howler’s binomial name (its species and genus) is Alouatta pigra, the Alouatta’s as a genus make up most of the Howler Monkeys, which are the largest of the New World Monkeys with but a few possible exceptions. Alouatta is home to all of the howler monkeys (ten species and ten subspecies), and belongs to the subfamily Alouattinae. Alouattinae belongs to the family Atelidae which is one of the four families of New World Monkeys; this includes the howler monkeys, along with spider monkeys, woolly monkeys, wooly spider monkeys, and Yellow-tailed Woolly Monkeys. Atelidae belongs to the Parvorder Platyrrhini, which contains all New World Monkeys, and includes Marmosets and Muriquis. Platyrrhini belongs to the infraorder Simiiformes, or ‘higher primates’, and this includes all New World and Old World monkeys from South America and Africa, and includes gibbons, great apes, and the family Hominidae of which we are members. Simiiformes belongs to the Suborder Haplorrhini, otherwise called dry-nosed primates; this includes all of the higher primates as well as Tarsiers. Haplorrhini belongs to the Order Primates, which is all related apes, monkeys, lorids, galagos, lemurs and human ancestors. Primates are in the class of Mammalia of the phylum Chordata in the Kingdom of Animalia.

The Guatemalan Black Howler is sympatric with another species, the Mantled Howler. Sympatric means that they share the same niche and territory, and encounter each other in the wild, they are also closely related.

The Guatemalan Black Howler is an Endangered Species, and is close to being classified as Critically Endangered if nothing is done to curb the loss of the species. In the next 30 years the IUCN expects to see a population loss of over 60%, making this species on the more endangered alive today. Major threats are habitat loss, poaching, and capture for use as ‘pets’.

Some facts about the
Mexican black howler monkey