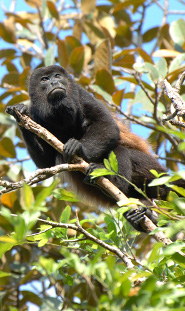 The Mantled Howler (Alouatta palliata), also called the Golden-mantled Howling Monkey, is a species of new world monkey in the howler monkey genus Alouatta. Their binomial name is Alouatta palliata, and they are a species that is of least concern on the IUCN redlist, meaning their populations are stable or growing (in the Alouatta palliata palliata subspecies and most common), unlike some of their relatives (the endangered Maranhão Red-handed Howler, and the endangered Guatemalan Black Howler being the two most at risk) however two of the subspecies of the Mantled Howler are endangered, and one of them is critically endangered. They have a black fur that covers their entire body; however they have a golden coloration upon each side which gives them their name. The Mantled Howler is one of the largest monkeys in the New World (specifically Central America and South America) with females reaching close to, or at two feet in length (63 cm), and males being over two feet (~65 cm) - added to that is a prehensile (usable) tail that measures an additional two feet (~64 cm) on average. Adult females can range in weight from seven to seventeen pounds (3-7kg) while adult males will usually come in heavier at ten to twenty two pounds (4.5-10kg). The weight of each monkey can vary depending on nutrition, location, and other factors related to where they are. The other portion of their diet consists of opportunistic feeding, such as when fruit or flowers are available. If enough fruit is available it can make up half or more of their diet at that given time, however otherwise they stick to leaves. These adaptations include both physical and behavioral. The molars of the Mantled Howler have shearing crests that are higher to help with the consumption of leaves. Their eyesight, unlike other New-world Monkeys, is tri-color (called trichromacy) which means they can see as well as we do, in order to distinguish between young and old leaves. Due to leaves being an extremely low energy food source, the males will make a howl to locate each other, rather than actually look; their distinctive call from the adaptation to a low energy diet: a modified hyoid bone allows for greater amplification of the calls made by males, which expends less energy - being comparable to if you were to talk normally. Some of the behaviors include resting for much of the time, and also being very selective about the leaves they eat, going for young leaves which are less likely to have toxins, and are easier to digest than mature leaves.

There are three known subspecies of the Mantled Howler.

The Ecuadorian Mantled Howler, binomial name Alouatta palliata aequatorialis, is located in Columbia, Panama, Peru, Ecuador, and Costa Rica. They are listed as vulnerable and considered endangered due to habitat loss and poaching.

The Golden-mantled Howler, binomial name Alouatta palliata palliata, is the most common and located in Costa Rica, Honduras, Nicaragua, and Guatemala. They are listed as a least-concern due to their healthy population.

The Mexican Howler, binomial name Alouatta palliata mexicana, is only found in Guatemala and Mexico, they are critically endangered and close to extinction due to massive amounts of habitat loss, it is expected to lose more than 80% of its population within the next 3 generations and possibly be extinct after this. This subspecies is in extreme danger.

The species name is palliata, and there are three subspecies (as shown above). The Mantled Howler belongs to the Genus Alouatta of which all the other howlers belong, and Alouatta belongs to the Family Atelidae which is one of the four in the New World Monkeys. Within Atelidae are the howlers, the spider monkeys, the woolly monkeys, and some extinct relatives. Atelidae belongs to the Parvorder Platyrrhini, which includes all of the New World Monkeys, such as the world’s smallest monkey, the Pygmy Marmoset to the sakis, and the squirrel monkeys. Platyrrhini belongs to the Infraorder Simiiformes of which we are members, and all in this Infraorder are called simians. From here on out it is a journey to all of our mammal relatives, as Simiiformes belongs to Suborder Haplorrhini which includes tarsiers and other relatives. Haplorrhini belongs to the Order Primates which includes our relatives like the lemur. Primates are all Euarchontoglires, which is the Superorder we belong to, and that includes our extinct relatives the Plesiadapiformes, the colugos, the treeshrews, and more distantly (being the Glires) rabbits, hares, pikas, and rodents. Euarchontoglires evolved in the late Cretaceous, before the Dinosaurs went extinct, starting way back some 80-90 million years ago - of course 65 million years ago that changed as the Dinosaurs went extinct. Euarchontoglires belong to the Infraclass Eutheria (placental mammals) which belongs to the Subclass Theria (all but monotremes) and that belongs to the Class Mammalia (All mammals).

They are very athletic when the need arises, and their locomotion is determined by their environment. Aided by their prehensile tail they can navigate the trees they live in and will leap from one limb to another if it must. They are an arboreal, meaning they are a tree-dweller, in addition to being diurnal, active in the day, and they mostly climb, walk, or run with all four hands and feet. They usually don’t do anything if they don’t have to however, as they are an exceptionally lazy and inactive monkey due to their very low energy diet - they are nearly comparable to the sloth, as they spend most of their active period eating and their social time is less than five percent. They do live in groups, and they number around 20 to 40 members, and when a young monkey reaches maturity they are usually evicted.

Interesting facts about the Mantled Howler:

They may use tools, as relatives have been recorded shooing away sloths that decided to walk into their trees, such as sticks.

Picture of the mantled howler © by Leonardo C. Fleck, licensed under GFDL

The Golden-mantled howling monkey, mantled howler monkey is listed as Least Concern. Does not qualify for a more at risk category. Widespread and abundant taxa are included in this category, on the IUCN Red List of Threatened Species

Namings for the mantled howler monkey

Some facts about the
Mantled howler monkey