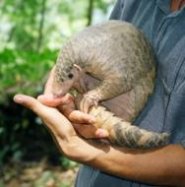 The Indian Pangolin (Manis crassicaudata) is a species of pangolin found in, well, India. The Indian Pangolin is also found in Sri Lanka and is an insectivore primarily. The Indian Pangolin is one of the few that will climb trees, however it is not strictly arboreal (tree dwelling) and will dig burrows. Like all pangolins it has large armored scales and will quickly curl into a ball when it feels threatened, with its tail covering its head for protection. The Indian pangolin grows to a weight of 17-19 lbs (8-9 kilograms) and their head and body length reaches 2.0-2.2 ft (60-65 centimeters) with their armored tails adding 1.5-1.8 ft (45-55 centimeters) to the overall length. Their skin is a brownish color, while the scales can be brownish to yellowish in appearance, but are mostly kept with their surrounding to better help them go un-noticed.

The Indian Pangolin belongs to the genus Manis, which has seven other species of pangolins, however the pangolins themselves are monotypes, meaning that their family Manidae has no other living genus but Manis, and their order Pholidota has no other living family except Manidae. Additional features of pangolins include their tongues, which can extend to over 9 inches (20-23 centimeters) and has muscles that extend back to its pelvic area in order to anchor the massive tongue. They also have a prehensile tail that they can use when climbing trees or balancing. The pangolin also posses five sharp claws on each limb, and use them for digging up their main foods which are majorly termites and ants.

The Indian Pangolin prefers hilly areas to planes, as long as they are tropical, and will sleep inside hollowed trees or dig a 20 foot deep burrow (6 meters) when the dirt is soft enough. However if the dirt is not as soft as that, they will dig 6 foot deep burrows out of necessity. Once inside their burrow, they will cover the doorway in loose dirt to hide it from predators and other invaders. The Indian Pangolin lives a mostly solitary life, having little contact with others until the breeding season starts, which is about the only time you will find two in the same burrow. If disturbed they can emit and acidic foul smelling liquid from glands - similar to how a skunk would, and can cause further irritation to any unlucky predator.

Gestation (pregnancy) times for the Indian Pangolin are roughly 65-75 days, with the average litter size being two or just one, and can occur at any season and time throughout the year. Other information, such as full maturity or rearing habits for the Indian Pangolin are as of yet unknown until further observation can be made. Currently the Indian Pangolin is listed as near-threatened by the International Union for the Conservation of Nature and Natural Resources (IUCN) and are dependant on further conservation. However human beings are one of the largest threats to the Indian Pangolin, as encroachment on habitat takes a dire toll on populations - which is not helped by poaching for food and scales which are though by many (incorrectly) to be a pleasure inducing substance. Other threats do include natural predators; however without the pressure from human beings it is likely that it would not endanger the species in the same way.

Here are some interesting facts about Indian Pangolins:

The Indian pangolin, thick-tailed pangolin is listed as Near Threatened (LR/nt), is close to qualifying for or is likely to qualify for a threatened category in the near future, on the IUCN Red List of Threatened Species

Some facts about the
Indian pangolin