Ground Pangolin - A Reason to Roll 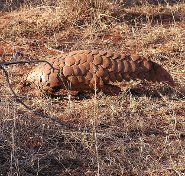 The Ground Pangolin, Temminck's Pangolin or Cape Pangolin (Manis Temminckii) is one of four species of pangolin found in Africa. It is the only one of the four which can also be found in southern and eastern Africa. It was named for Coenraad Jacob Temminck a Dutch Zoologist who studied these creatures.

The Ground Pangolin is listed on the United States Fish and Wildlife Services endangered species because this beautiful animal was once hunted for its scales which were used in love potions. It has also been burnt in many brush fires which has added to its endangerment.

The Ground Pangolin is covered almost all over with hard scales except for its soft underside. The scales are colored from grayish brown to dark olive brown. When this animal feels threatened, it will roll up into a ball, hence the title a reason to roll. It could also use its scales on the tail as a slashing tool to ward off potential attackers. Although it is found over a large area of Africa, it is difficult to find because of the threats posed by humans.

It can grow to a length of approximately 1 meter or 3.28 feet. When viewing the body of this animal, it will look very disproportionate, with a small head, small forelegs, large powerful hind legs and a tail which can measure 30 to 50 cm. or 1 to 2 feet approximately.

The Ground Pangolin, like all the other pangolins, are nocturnal creatures, preferring the nighttime hours. Their diet consists mainly of ants and termites. Their long, sticky tongue makes obtaining these treats easy. The tongue is stored in a pocket in the mouth. Even though they are perfectly capable of digging their own burrows, they usually will occupy unused holes which were previously dug by either warthogs or aardvarks. They can also be found sleeping in dense vegetation which makes finding them even more difficult.

Although their bodies look cumbersome, the Ground Pangolin can move quite rapidly. They have been observed moving at speeds of up to 50 meters or 160 feet per minute. They do move slowly most of the time though and they walk on their hind legs. Their tail is used for balance when they walk.