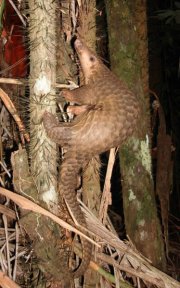 Malayan Pangolins inhabit burrows, which they dig out themselves, or occupy burrows from previous residents. They use their strong foreclaws, which also come in handy when digging out termite mounds and ant nests.They are remarkable creatures, nicknamed the "living pine cones", with their dragon like armor with sharp scales.

The Malayan Pangolin's natural predators are the Tiger and the Clouded Leopard.

Interesting fact Although they resemble tanks, a mother Pangolin is extremely protective. When threatened, the mother will curl into a ball with the young inside.

Picture of the Malayan pangolin by de:User:Piekfrosch, licensed under GFDL

The Malayan pangolin is listed as Near Threatened (LR/nt), is close to qualifying for or is likely to qualify for a threatened category in the near future, on the IUCN Red List of Threatened Species