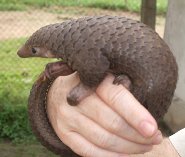 The tree pangolin (Manis tricuspis) is a small mammal that lives in the rainforest of west to central Africa. It weighs approximately 4-5 lbs (about 2 kg) and is an anteater. The body of the tree pangolin is almost completely covered in hard scales which serve to protect it from predators. The scales each have three sharp points and are layered over the entire body except for the underbelly and parts of the head. The tree pangolin has a long thick tail that is also covered in scales and helps provide support as the tree pangolin climbs the trees of the rain forest.

The female and male tree pangolins live alone unless the female is raising her young. The males will roam during mating season and each female will give birth to one offspring. The gestation period is 150 days and the newborn will stay with the mother for about 4 months. During that time, the mother will protect the newborn by rolling into a ball around it. The infant cannot walk for a few weeks after birth so it attaches to the mother's tail and is carried around through the trees.

The tree pangolins survive on a diet of ants, termites, and other insects. They use their claws to dig in the ground to search for food and then they capture insects with their long tongues that are coated in thick saliva. They have no teeth so they digest food by swallowing small rocks and sand that grind the food once it reaches the stomach.

The status of the tree pangolin is "near threatened" and they have been hunted by man for their meat and scales. Some cultures believe that the scales have healing powers and will protect them against evil.

The Three-cusped pangolin, tree pangolin, white-bellied pangolin is listed as Least Concern (LR/lc), lowest risk. Does not qualify for a more at risk category. Widespread and abundant taxa are included in this category, on the IUCN Red List of Threatened Species