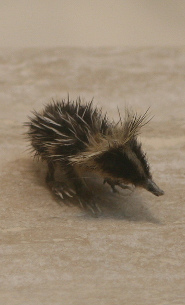 That can soon change if Madagascar’s rainforests and marshes continue to be destroyed. Lowland streaked tenrecs eat insects, especially earthworms, which thrive in wooded areas near water. Although there are tenrecs in protected areas of Madagascar, biologists fear that tourists or curious natives could disturb their life and communications to the point where they may die from stress.

The lowland streaked tenrec has a body similar to a pygmy hedgehog, but has a long snout like an anteater. The snout is tipped in pink skin. The undersides of this little mammal are a chestnut brown, but on top they are striped like a bumblebee in yellow and black. Adults grow to only 6.3 to 7.48 inches (16 to 19 centimeters) long and weigh 3.17 to 7.76 ounces (90 to 220 grams.)

But it’s this little mammal’s large spines that are truly remarkable. The spines along the flanks and back serve a dual purpose. They not only help protect the tenrec against predators such as domestic dogs, mongooses,

When a tenrec wants to communicate, it rubs specific pale spines together to generate an ultrasonic squeak. The sound carries a long way underground, where tenrecs spend most of their lives.

Lowland streaked tenrecs enjoy the company of tight-knit family groups. As many as 20 tenrecs can live in a single burrow. These very shy animals are opportunists, being active in both day and night to get food. Females become sexually active at the tender age of 5 weeks. Mating season is from September to December. After a gestation of 55 to 63 days, females give birth to a litter of one to eight babies that weigh a mere 0.28 ounces (8 grams) each. She will suckle them for only 25 days.

Tenrecs hunt for insects aboveground and below ground, using their long snouts to poke through dead leaves or other litter. They usually go out in pairs or small groups for safety. With luck, a lowland streaked tenrec can live two and a half years.

The Lowland streaked tenrec is listed as Least Concern. Does not qualify for a more at risk category. Widespread and abundant taxa are included in this category, on the IUCN Red List of Threatened Species

Some facts about the
Streaked tenrec