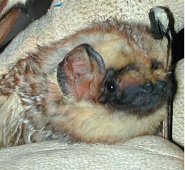 The Hoary Bat (Lasiurus cinereus), is an international speedster whose habits have not been completely documented.

For example, have you ever found the head and wings of a moth on the ground, and the rest of the body missing? It might look like an alien autopsy, but it is more likely the work of the hoary bat. It is thought that the hoary bat hunts by flying up behind its quarry and biting off the body in one swift motion, leaving the less tasty head and wings to fall to the ground. The hoary bat is thought to fly at speeds approaching 60 miles per hour, which explains its stealth and success as an insect predator.

A nocturnal hunter, the Hoary bat eats a variety of insects including moths, flies, dragonflies, wasps, mosquitoes, grasshoppers, termites, and beetles. Their chosen diet makes them a valuable ally to humans as they naturally reduce pest insect populations.

The hoary bat has heavy, brown fur which is tipped with white, giving it a frosted appearance, and accounting for its name.

Something of a loner, the hoary bat prefers to find shelter either alone or in small family groups. These bats typically opt for densely wooded areas, often choosing stands of evergreens. The hoary bat is found throughout the United States and Southern Canada and as far south as Chile and Argentina in South America. A subspecies (L. c. semotus) is also found in Hawaii. These bats migrate during colder months to warmer coastal areas of the United States, to Mexico, and possibility farther south. Although normally solitary, they may migrate in groups.

The hoary bat does not have many natural predators, but occasionally they fall victim to birds of prey and snakes. The Hoary Bat is not considered to be a threatened or endangered species.

The hoary bat’s body is no bigger than a common mouse, typically weighing between 20 and 34 grams (or .7 and 1.2 ounces) and measuring between 7.5 and 15 centimeters in length (between 3 to 6 inches). The bat has a wingspan of up to 40 centimeters (16 inches). These bats usually have offspring annually, normally bearing two per litter, although litters of as many as four pups have been observed.

The Hawaiian hoary bat, hoary bat is listed as Least Concern (LR/lc), lowest risk. Does not qualify for a more at risk category. Widespread and abundant taxa are included in this category, on the IUCN Red List of Threatened Species

Namings for the hoary bat

Some facts about the
Hoary bat