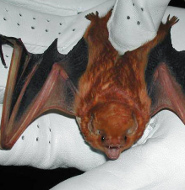 The Red Bat (Lasiurus borealis), is aptly named due to its distinctive reddish coloring. and is one of the mammals in which the males and females are differently colored. The male's fur is brighter shades of red to orange-red; while the females are duller red, chestnut, or brick. Both sexes have a frosted appearance from their white tipped hairs; however females are usually more frosted. Medium-sized, the Red Bat averages 4 to 5 centimeters (1.5 - 2 inches), with its total length about 9 to 12 centimeters (3.5 to 4.5 inches), including the tail. It weighs between 7 to 19 grams (1/4 to 5/8 ounces).

The Red Bat is unique in that instead of roosting in caves, mining tunnels, or other interior spaces; it prefers to roost in the open in trees. Their range is from southern Canada, through the United States, and south to Chile and Argentina. They prefer forested areas, forest edges, or hedgerows. Their coloring helps them to blend in with the foliage, and hanging upside down, they look like dead leaves or pine cones. Although some Red Bats in the southern part of its range may stay in the same area year around, the northern ones migrate south in the winter, often in flocks, where they hibernate. A variety of locations are chosen for hibernation, often tree hollows, underneath shaggy bark, or even on the ground beneath fallen leaf litter.

The Red Bats are the first bats one usually sees flying around after sunset. Their favorite foods are moths and beetles, but they will settle for other insects, especially flying ones – the bigger the better. An unusual fact is that they follow the same routes each night for feeding. Predators include birds of prey and owls, snakes, mammals such as raccoons and opossums, and large spiders such as tarantulas. However these prolific bats are not endangered.

The Red Bat usually lives alone, or as a mother with her young; except when migrating in flocks. Mating occurs in the fall, and in the spring the female gives birth, with litters of one to five babies. The pups are born blind, but learn to fly in about a month on average. They are weaned around 38 days old, and become independent. Thus begins the life cycle of the Red Bat.

The Red bat is listed as Least Concern (LR/lc), lowest risk. Does not qualify for a more at risk category. Widespread and abundant taxa are included in this category, on the IUCN Red List of Threatened Species

Namings for the red bat