Harbor Porpoises - Polluted in the Harbor 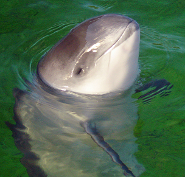 The harbor porpoise (Phocoena phocoena) is perhaps the most common of all the species of porpoises in existence today. Other porpoise species in existence include the finless porpoise, vaquita, spectacled porpoise, burmeister’s porpoise and the dall's porpoise. Porpoises are in the whale and dolphin family, all belonging to the order Cetacea. Harbor porpoises are often spotted in the harbors, bays, estuaries, fjords, rivers and other inland areas of the North Atlantic, North Pacific and Black Sea coastal waters, thus earning their name.

The harbor porpoise is a small, hardy marine mammal ranging in weight from 61 to 77 kg (135-170 lbs) and in length from 1.5 to 1.7 m (5 to 5.5 ft) long. Female porpoises are typically larger than males. Unlike the black and white coloration of the dall’s and spectacled porpoises, the harbor porpoise is dark gray to dark brown in color with a white belly. Harbor porpoises are known for their short, blunt beaks, rounded heads, triangular dorsal fins and small spade-shaped teeth. They can be found alone or in groups of up to five other porpoises, sometimes even more. Their diet consists of small fish including cod, herring, pollock, sardines, mackerel, capelin, whiting and squid. Because of their small size and lack of stored fat, they feed often throughout the day. The life expectancy of this species is approximately 15-20 years.

Unlike the vaquita porpoise, harbor porpoises are not considered endangered, though their numbers are declining. They are not typically hunted by whalers and commercial fishermen, but are often trapped in fishing nets and harmed by other fishing equipment such as fish weirs and lines. They are also affected by pollution. It is estimated that thousands of harbor porpoises die every year due to these factors. Many organizations, such as the Humane Society, have been actively fighting against net entanglement in order to protect the harbor porpoise species. Though not typically hunted by humans, they fall prey to natural predators, such as killer whales and large sharks. Mature female harbor porpoises only give birth to one calf a year making the process of replenishing the species relatively slow.

Picture of the harbor porpoise by AVampireTear, licensed under GFDL.

The Common porpoise, harbour porpoise is listed as Vulnerable (VU), considered to be facing a high risk of extinction in the wild, on the IUCN Red List of Threatened Species

Namings for the harbor porpoise

Some facts about the
Harbor porpoise