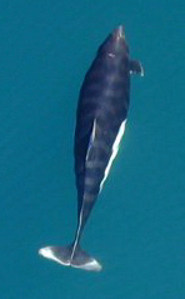 The Dall's Porpoise (Phocoenoides dalli) is an incredible swimmer with turquoise eyes and the ability to breathe air while rushing through the water at top speeds. These amazing porpoises love bow-riding, yet are shy around humans, and are some of the fastest mammals riding the waves in the North Pacific.

The Dall's porpoise is robust and muscular, particularly through the middle. The head is small and rounded, which makes it look smaller than it really is. The beak is small and poorly defined. The small mouth has a bit of an under bite, and their teeth are ideal for helping them hold on to the slippery prey. This animal looks a bit out of proportion because of an additional hump located on the bottom of the body. One of the amazing features of the Dall's porpoise is their colored eyes. The iris is black or dark blue with a deep, iridescent turquoise colored pupil.

Their coloring is typically black on the top with white bellies and white sides. One of the smaller porpoises, males are typically 7.5 feet (2.29 meter) long while females are typically 6 feet (2.1 meters) long. Weights for both males and females are typically about 270 pounds (123 kg). They can get larger, however. The largest recorded to date weighed in at 480 pounds, or 220 kg. Their territory ranges from Baja, California all the way to Alaska, through the Bering Sea and into the waters of Japan. They prefer the cooler temperatures of the water and typically stay where the water temperature is below 60 degrees F (15 C).

The Dall's porpoise can go as fast as 30 knots. It loves bow-riding with fast vessels, but will avoid contact with the people on board. When dashing through the water its head and back move in unison to create a unique spray of water known as a "rooster tail". This movement actually creates a hollow cone in the water that will allow the porpoise to breathe without surfacing.

They are not currently endangered, although they are in need of protection due to the growing fishing industry. Thousands of Dall's porpoises are caught in Japanese nets set out for salmon and squid. Other threats to this impressive swimmer include pollutants and other contaminants in the water. Steps are currently underway to protect this species and preserve it for the future.

They dine on small fish; specifically squid, capelin, herring, and sardines. They also enjoy hake, smelts, and lantern fish. A largely nocturnal animal, it mainly feeds at night and will consume between 28 and 30 pounds (12.7 - 13.6 kg) per day. Natural predators of these porpoises include killer whales and sharks. However, they are able to use their small size and quick movements to their advantage as they escape these predators.

The Dall's porpoise, white-flanked porpoise is listed as Conservation Dependent (LR/cd), the focus of a continuing taxon-specific or habitat-specific conservation programme targeted towards the taxon in question, the cessation of which would result in the taxon qualifying for one of the threatened categories below within a period of five years, on the IUCN Red List of Threatened Species

Namings for the Dall

A young / baby of a Dall is called a 'calf'. The females are called 'cow' and males 'bull'. A Dall group is called a 'school, crowd, herd or pod'.

Some facts about the
Dall's porpoise