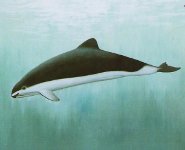 The Spectacled Porpoise (Australophocaena dioptrica) is a member of the porpoise family whose habit ranges from the southeastern part of South America and further south along Antarctica. The porpoise is classified as a circumpolar animal in cool sub-Antarctic and low Antarctic waters. A high concentration of spectacled porpoises is thought to exist around Tierra del Fuego, an archipelago off the southernmost tip of South America, which is separated from the South American mainland by the Strait of Magellan, by finding of many skeletons. Elsewhere in the Atlantic the porpoise has been seen off Brazil, South Georgia, and the Falkland Islands. In the South Pacific the porpoise has been seen off Auckland, Tasmania, and Southern Australia. They have also been spotted off of Kerguelen and Heard Island in the southern Indian Ocean. Though the porpoises are known to frequent these areas they still remain a rarely seen animal and individuals are very rarely seen in the open sea.

The Spectacled Porpoise has a distinctive coloring with a blue-black dorsal side and a white underbelly. Their black eyes are encircled by a striking white ring, or spectacle, which gives them their name. A black strip extends from the jaw-line to the flippers with the porpoise’s lips also being black in color. A white stripe runs along the top of their tail and their head is rather small and without beak. Their dorsal fin is large and rounded, and they have spade-shaped teeth.

The Spectacled Porpoise is a carnivorous animal that feeds mainly on squid and fish, but also eats octopus, shrimp, and mollusks. Behavior of the porpoise is little known as most of the findings have been taken from stranded individuals, but they are known to live in groups of up to 25 specimens, and they are fast active swimmers who normally avoid boats. Human interaction has been limited, because of their rare encounters, so much of the relationship between man and this species of porpoise is unknown, however it should be noted that they are already shy and may be fearful rather than curious toward any human invaders (contrasted with bottlenose dolphins which are very curious toward man). Another side-effect of being rarely observed is little knowledge of the animal’s reproductive biology, but calving is believed to take place from late winter to early spring. The total population of the species is unknown but it is believed to be threatened – however because of this lack of census for their population they are listed under the DD (Data Deficient – meaning not enough is known) category of the IUCN’s (International Union for the Conservation of Nature and Natural Resources) Conservation List. Efforts are still underway to attempt to track and find out just how many there are, how healthy they are, and if they need international protection from the IUCN.

Drawing of the spectacled porpoise by Alessio Marrucci of the Swiss Cetacean Society, 2007, licensed under GFDL