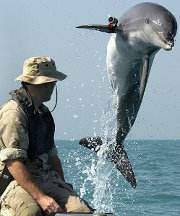 When most people think of dolphins, the image that will appear in their minds is that of the bottlenose dolphin (Tursiops truncatus), the best known member of the Delphinidae family. Their fame is largely due to the popularization of this species through the media, in films and long running successful television shows, such as Flipper. Bottlenose dolphins are also commonly seen performing tricks for large audiences in marine parks.

Bottlenose dolphins are two to four meters (6.6 to 13.2 feet) in length when adult and weigh anywhere from 150 to 650 kilograms (330 to 1443lbs), with males typically being larger than females. Bottlenose dolphins are gray in color, with a lighter under-belly, which is frequently revealed when they playfully leap out of the water.

The bottlenose dolphin can be found in most regions of the world, except in polar waters, which are too cold for these dolphins. They are found both near the shore and out at sea, with those living offshore generally growing to a larger size.

While solitary bottlenose dolphins are not unheard of, these creatures tend to live in groups known as pods. Pods range in size, most commonly being made up of 15 members but remarkably super-pods of over 1000 dolphins have been observed in the wild.

These aquatic mammals love to eat fish but their diet may also include shrimp, squid and eels. Bottlenose dolphins have evolved the ability to hunt using echolocation. They emit waves of high frequency sound from the melon organ on their head, collecting and analyzing the properties of the returning echo for any signs of nearby prey. Bottlenose dolphins also emit sound to communicate with other members of their species.

Bottlenose dolphins are widely thought to be one of the most intelligent members of the animal kingdom. Interestingly, their brain is even larger than that of humans. However, brain size does not correlate perfectly with intelligence, and many further studies have been used to try to determine the true level of dolphin intelligence.

It is the bottlenose dolphin's high intelligence, along with its echolocation ability that has made it such a useful ally in naval operations. The Navy Marine Mammal Program trains these animals to detect sea mines and enemy divers. Upon finding a mine the dolphin will report to its handler, who will then send the dolphin back out with a buoy with which to more specifically mark the location of the mine.

The success of bottlenose dolphins may be in no small part due to the high degree of genetic variation found in their gene pool. This renders bottlenose populations more resilient to disease, as there is likely to be at least a few individuals that by chance have a genetic make-up which renders them resistant to a new attacking pathogen, enabling them to replenish the population. However, the sheer scale of the genetic diversity of the bottlenose dolphin leads some scientists to conclude that it is not a single species at all.

Namings for the bottlenosed dolphin

Some facts about the
Bottlenosed dolphin