African civet - The Perfumer From Nature 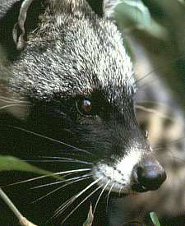 The African civet (Civettictis civetta) is a carnivore which lives in central and southern Africa in savannas, forests and grasslands. Their main habitat requirements are a permanent water supply and a covering such as tall grasses to hide in during the hunt and for protection. They may look like cats, but they are not. Instead, they are related to the mongoose. These animals usually live to be 15-20 years old, weigh 10-17 kg (22-37 lbs) and are an average of 670-840 mm (26-33 in) in body length. Their hind legs are larger and longer than their front, giving them a raccoon-like stance.

African civets usually live alone, with the exception being at breeding time. They will burrow in underground nests, which were dug by other species, to raise their young. Being mammals, the young rely on their mother's milk for the first six weeks of life. Unlike most carnivores, young civets are born very well developed. They have fur and are able to crawl at birth and within the first week they are able to support their body and walk around.

Civets hunt mainly at night from just before sunset to around midnight. They feed on various items including insects, carrion, eggs, small reptiles, birds, rodents and fruit. They use their 40 teeth and mouths to kill their prey, not their claws. The methods of the kill include shaking their heads to snap the prey's spine, throwing it around or the use of a killing bite, wherein the grip is not released until the prey is dead.

Musk (also called civet) collected from the civet's perineal glands has been used in the manufacture of perfume for hundreds of years. Musk is usually obtained from wild-caught civets, with each producing up to 3-4 g (0.1 ounce) of musk per week. The method of civet captivity and musk collection is decidedly cruel. These animals are not considered endangered, but they are protected under the Convention on International Trade in Endangered Species of Wild Fauna and Flora (CITES), Appendix III which asks for help controlling global trade in a species.

Predators of African civets include lions, hyenas, leopards as well humans, who will kill to protect their crops, and domestic dogs. Rabies has been reported in African civets and they are thought to be a reservoir for the virus.

The African civet is listed as Least Concern (LR/lc), lowest risk. Does not qualify for a more at risk category. Widespread and abundant taxa are included in this category, on the IUCN Red List of Threatened Species

Some facts about the
African civet