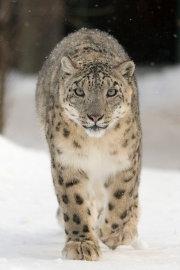 While the leopard and the snow leopard share the same broken-spot markings, the rosettes of the snow leopard are different, more like a jaguar, which lives in South America. Its fur is both woolly and long, this serves as protection against the extreme harshness of the cold.The coloration of the Snow Leopard is smoky gray, with a sprinkling of yellow and brown at the sides. They have white fur on the chest and belly, while the head has tiny ears. Snow Leopards could reach 1.3m and weigh up to 70 kgs. Its proportionally long tail, is used to balance itself when traversing through steep, high and rocky terrain.
Ordinarily, it lives at elevations ranging from 2000m to 4000m, but to find one at lower heights is not impossible. A Snow Leopard could live in valley ridges, mountain passes and rocky outcrops. 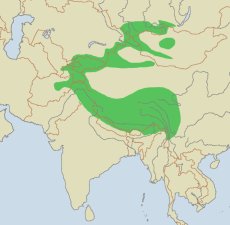 The Snow Leopard is active during the twilight hours. Its diet consists of Bharal (it is a kind of sheep), Markhor, goats, ibex, musk deers, birds, hares, marmots and other small rodents. Snow leopards often hunt alone, but then again, they hunt in pairs if the prey is too large. One would stalk the target, while the partner would go for the kill. It can defeat an animal thrice its size.

The newborns are born during the spring, the litter size ranges from 1 to 4, the average is actually two. These young come out after a gestation of around 100 days.

Interesting fact: The snow leopard can jump as far as 14 meters (46 feet).

Picture of the snow leopard by Bernard Landgraf, licensed under GFDL

Range map of the snow leopard by Laurascudder, licensed under GFDL

The Ounce, snow leopard is listed as Endangered (EN), considered to be facing a very high risk of extinction in the wild, on the IUCN Red List of Threatened Species

Namings for the snow leopard

Some facts about the
Snow leopard