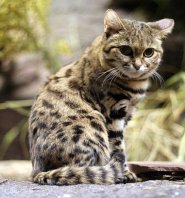 Among the different breeds of wild cat, the Black-footed Cat (Felis nigripes) is among the smallest. The male's weight is just 2.2 kilograms, and the female weighs even less, an average of 1.5 kilograms. Their body length is approximately 50 centimeters and shoulder height is 22 centimeters. The Black-footed Cat has a broad head, with a black line that runs across the cheeks from the outer corner of each eye. Its coat varies from sandy brown to a red-brown, and the pelage is spotted with dark patches. Its legs have horizontal stripes, the tail adorned with rings. They can only be found in South Angola, Botswana, Namibia and South Africa. The Black-footed Cats lives in an arid environment, and it is strongly believed that they can live without drinking water. They get what they could from the food, just like the Sand Cat of Africa.

The Black-footed Cat lives in uninhabited burrows, covered and hidden by big boulders. Hunting is basically done at night, and their diet consists of rodents, ground squirrels, mice, small mammals, and as secondary choices- spiders and even reptiles. Actually, it is common for an individual to go after bigger prey, and store the carcass for future consumption. A Black-footed Cat is also capable of scavenging on the meat/flesh of dead mammals, a lamb for example. The newborns would attain "maturity" when they come to about 20 months. During times when they feel threatened, a male would emit a high-level "roar".

Interesting fact: Birds can be captured by Black-footed cats, it would jump into the air at the exact moment that the bird takes off...the sense of timing of these cats is highly-developed.

Picture of the Black-footed cat by Asten, original http://www.flickr.com/photos/asten/260095916/, licensed under Attribution-Noncommercial 2.0 Generic

The Black-footed cat, small-spotted cat is listed as Vulnerable (VU), considered to be facing a high risk of extinction in the wild, on the IUCN Red List of Threatened Species

Namings for the blackfooted cat

Some facts about the
Black-footed cat