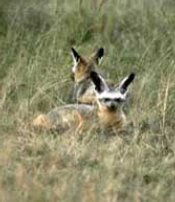 The Bat-eared Fox (Otocyon megalotis) exists in two separate populations, one is Somalia, Sudan and Ethiopia, and the other in South African parts. These foxes stay at the grasslands and semi-deserts.

Bat-eared Foxes have grey-brown bodies, dark legs/ears, and the tails are adorned with a black mark. Its muzzle is small yet pointed, and the forehead is broad. One unusual characteristic of the Bat-eared Fox is their teeth, it possesses extra molars and a bat-eared fox could have up to fifty teeth. Their diet consists of insects, and termites comprise 50% of the diet consumption.

A Bat-eared Fox breeds just once in a year, and the cubs are born at the start of the rainy period. The Bat-eared Fox would take care of their newborns in just one place for a long time, and the gestation can last around ten weeks. There exists a high infant mortality rate, and you know why? Sadly, there are just four nipples of the female Bat-eared Fox, thus, she might be forced to kill some of the young so that at least 4 would hold better odds of surviving. When six months have passed, the kits would have grown, and she could leave the protection and nurturing.

They are monogamous, and they are capable of living in threes, that is, one male and two from the distaff side. If found in pairs, it could be observed that they playwith each other, and generally aid each other. These kind of foxes are being hunted both for the meat and for their pelts. Without meaning to, mankind has actually helped them, the clearing of grasslands have permitted the increase of termites, and these foxes naturally are happy with that.

Picture of the Bat-eared fox by www.bourlingueurs.com

The Bat-eared fox is listed as Least Concern. Does not qualify for a more at risk category. Widespread and abundant taxa are included in this category, on the IUCN Red List of Threatened Species

Namings for the bateared fox

Some facts about the
Bat-eared fox