Chamois - From Europe to New Zealand 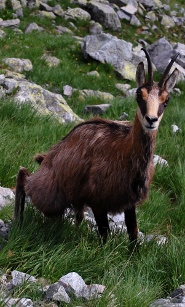 The chamois (Rupicapra rupicapra), is a goat-antelope species and native to the mountainous regions of Europe, the European Alps, the Carpathian Mountains of Romania, the Tatra Mountains, the Gran Sasso areas of the central Italian Apennines, the Balkans, the Caucasus, and parts of Turkey. The chamois is also found in the South Island of New Zealand, where they call it 'a shammy'. Since this species is on the verge of extinction, it is a protected animal under the "European Habitats Directive".

Chamois are normally found at higher altitudes and adapted to live in rugged, steep rocky terrain. A mature chamois may reach the height of about 30 inches (75 cm) and may weigh up to 110 lb (50 kg). Both, male and female have short and straight horns which turn backwards at the tip and males have more curved and longer horns than their counterparts. The horns of the chamois grow only in summer, no growth of the horns in winters. Because of this reason, a ring is formed on the horns every season which can give an indication of the chamois' age. The color of the coat changes according to the season and is dark brown in summers and turns light gray in winters.

The distinct characteristics of a chamois are its white face and the black strips below its eyes, a black strip on the back, and a white rump. Chamois can live up to 20 years of age. The adult males do not prefer living in herds; they choose to live in solitary while the young ones live in herds with their mothers. During the mating season (May in New Zealand, end of November or starting of December in Europe) there are fierce battles between the males to attract a female. The gestation period for impregnated female is 20 weeks long, and only one young one is born. The young chamois becomes an adult at the age of three years.

In 1907, the Austrian Emperor, Franz Joseph 1 had gifted an Alpine Chamois to New Zealand and this is how chamois got their entry in New Zealand. First, they were released in Mount Crook/Aoraki region and then, gradually, they spread all over South Island. There is no restriction on hunting of chamois in New Zealand and in fact, it is encouraged to minimize their impact on the New Zealand's alpine flora.

Chamois are hunted all over the world for their tasty meat. They come out in search of food when it is cool, i.e. in the morning and at night and this trait is exploited by the hunters because of which chamois become an easy target of hunting. The mane at the back of their neck is used to decorate hats in the alpine countries. Chamois are also killed for their smooth and soft leather.

Picture of the chamois by Sfu, licensed under GFDL

The Chamois, northern chamois is listed as Least Concern (LR/lc), lowest risk. Does not qualify for a more at risk category. Widespread and abundant taxa are included in this category, on the IUCN Red List of Threatened Species

Namings for the chamois

A young / baby of a chamois is called a 'calf'. The females are called 'doe' and males 'bull'. A chamois group is called a 'herd'.

Some facts about the
Chamois