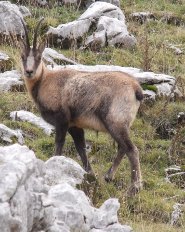 The Pyrenean chamois (Rupicapra pyrenaica), sometimes known simply as chamois, pronounced "shammy", is a goat-like creature native to the mountain ranges of the Pyrenees, northwestern Spain and the Apennines in central Italy. It's natural habitat is the high alpine meadows during the warmer part of the year, venturing down onto the slopes when the weather gets colder. They only very rarely will enter the forest.

The animal usually weighs between 24 and 50 kg, or 53 to 110 lbs. The average weight is about 37 kg, or 81 lbs. It has a length of 90 to 120 cm, or 35 to 51 inches, with an average length of 110 cm, or 43 inches. In the summer, its coat is reddish-brown and in winter it grows a much thicker brownish-black coat, with white markings. Both males and female have black horns that are close together and slender, rise vertically and then bend sharply to form hooks. They have padded and rather elastic hoofs, allowing them to keep their footing on otherwise treacherous terrain.

The Pyrenean chamois is nimble and known for its grace. It can jump nearly two meters, or approximately six feet, straight up into the air. It can also reach speeds of about 50 km per hour, or about 31 miles per hour, over rough and uneven ground. The chamois is also prized for its skin, which is made into a very soft and pliable leather which is popular for shining products. It is also hunted for meat and its dense winter fur.

For a time, the Pyrenean chamois population was in decline because of over-hunting and the animal was placed on the endangered list, but thanks to protective measures it is not currently at risk. The population and range of the chamois continue to increase. However, the subspecies R. p. ornata is still vulnerable and considered endangered at this time.

Other than humans, the Pyrenean chamois' natural predators include wolves, lynxes and fox. The chamois themselves feed on herbs and flowers during the summer. In the winter, they turn to moss, lichen and young pine shoots. When conditions become extremely difficult, chamois can fast for up to two weeks until food becomes available.

The Southern chamois is listed as Conservation Dependent (LR/cd), the focus of a continuing taxon-specific or habitat-specific conservation programme targeted towards the taxon in question, the cessation of which would result in the taxon qualifying for one of the threatened categories below within a period of five years, on the IUCN Red List of Threatened Species

Namings for the Pyrenean chamois

Some facts about the
Pyranean chamois