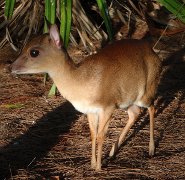 Although they resemble tiny musk deer, the suni (Neotragus moschatus) is actually a species of antelope. But the tiny antelope puts off a pungent odor secreted from glands in the suni’s head. Suni keep hidden as possible, so communicate with other suni mostly through means of smell. Along with leaving their distinctive odor rubbed on conspicuous tree branches and rocks, male suni leave piles of droppings. This is a warning to other male suni that this territory is taken.

Suni need to stay hidden because they are a favorite meal of numerous predators, including humans and their dogs. Lions, large snakes and birds of prey hunt suni adults and calves. Suni are limited to southeastern Kenya, the island of Zanzibar, parts of South Africa and some coast lines of south east Africa. Despite predation, suni thrive and are a common species in these small parts of Africa. They are allowed to be hunted during a brief season. Small suni herds or pairs do well in captivity.

Only males grow black ridged horns, which grow up to five inches (12.7 cm). The horns gently curve over the ears towards the spine. Both sexes sport dusty brown coats, which blend in with the scrubland and dry underbrush where they prefer to live. Suni have grayish white chins, necks, insides of the legs and bellies and a pale ring around the large, dark eyes.

Suni live in small herds of one male and up to four females and calves, but males clearly prefer one female over others. Males vigorously defend their territories from other males, especially during the breeding season. Although suni primarily communicate to each other through smell, they also can produce barks and whistles. They sleep during the day and feed primarily at night. They freeze when they sense danger. When a predator is just about to strike, the suni suddenly leaps up and darts through the undergrowth to avoid capture.

Suni does carry their calves for six months. Because the calves are so large in relation to their mothers, she can only have one per pregnancy. Babies are born with darker coats than adults. They are left in hidden areas and keep still while the mothers go off to feed. Suni eat leaves, fruits, flower buds, mushrooms, shoots and leaves knocked off of trees by monkeys or birds. Calves are weaned after a mere 60 days and 4 months after that they are ready to breed. It is unknown how long they can live in the wild, but live to 10 years in captivity.

The Suni is listed as Conservation Dependent (LR/cd), the focus of a continuing taxon-specific or habitat-specific conservation programme targeted towards the taxon in question, the cessation of which would result in the taxon qualifying for one of the threatened categories below within a period of five years, on the IUCN Red List of Threatened Species

Some facts about the
Suni