Blackbuck Antelopes - (Literally) One of a Kind 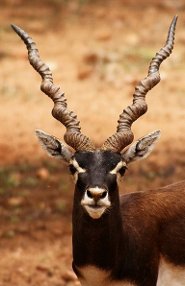 The blackbuck (Antilope cervicapra) is a species of antelope that is well known for their large horns, which typically curl about five times, giving them a very distinctive look. About the same size as other antelope, a female blackbuck weights about 55lb while a male weighs slightly more at 77lb. In height, the female stands at just above 3ft while the make is nearly 5ft due to the large horns that females lack.

One interesting note about these creatures is that the blackbuck is one of the only antelopes with distinctive coloration. Both genders start out as a light brown, but at around two years of age the males slowly darken to a rich chocolate or black color. Both genders also have white along their chest and underside, but only the males have the long twisted horn that the blackbuck's are so famously known for.

But perhaps the most amazing thing about the blackbuck is just how unique they are. In addition to their distinct coloration, the blackbuck is also the only surviving species of the Antilope population. Their ancestor, including the Antilope intermedius, Antilope subtorta, and Antilope planicornis, are all extinct, leaving only a few fossilized remains behind.

Sadly, the blackbuck may very well be on it's way to repeating history. The species is currently listed as "Near Threatened" on the conservation status scale and has been for nearly ten years. This means that while not currently threatened, without a close eye and constant repopulating, the blackbuck could become extinct. This is mostly due to being hunted by residents of India who view the antelope as crop-raiding pest. While now illegal, there have still been many reports of humans killing the species over the years.

Humans aren't the only thing hunting the blackbuck however. The Indian Cheetah was previously the blackbuck's biggest predators, partly because the cheetah was one of the few animals that could outrun the antelope, which are one of the fastest land animals. Now that that Indian Cheetah has become extinct, wolves and feral dogs have become the leading predators of this species.

The natural habitat of the Blackbuck has been dwindling overtime which is also adding to the threat of extinction. Blackbucks can usually be found in grassy plains, but as more plains are being torn apart and used as businesses, buildings and parking lots, the antelope is forced to go else where. They often end up near bovine who share the same diet of grass, flowers, pods and fruit. Unfortunately, this puts the blackbuck at disk for bovine diseases, resulting in them dying from diseases at an even faster rate.

While the blackbuck originally lived in India and Pakistan, in recently years the species has been brought to the US and Argentina. This is done in hopes that, by providing access to grassy plains, the antelope will be encouraged to breed more.

Today, there are over 50,000 blackbucks roaming their natural habitat with an additional 43,000 in the introduced locations. Because of their threatened nature, you can often see the species at the zoo.

Picture of the blackbuck by Pranav Yaddanapudi, licensed under the Creative Commons Attribution 2.0 Generic license.

The Blackbuck is listed as Near Threatened (NT), is close to qualifying for or is likely to qualify for a threatened category in the near future, on the IUCN Red List of Threatened Species

Some facts about the
Blackbuck