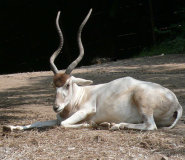 The Addax (Addax nasomaculatus) is a severely endangered species, and is listed as critically endangered with just 500 in the wild, and 800 in captivity, some of which are bred for trophy hunts. The Addax stands about a meter tall at the shoulder (three feet) and weighs about 60-100 kilograms (132-220 lbs), and has two twisted horns that can grow to 120 centimeters in length (47 inches). The Addax is usually white and sports a brownish fur on its chest, neck and head are brown - however in winter the coat changes color to brown. The tip of the nose is white and the nostrils are red. Finally they have a beard, or goatee, that is brownish in appearance, but varies from individual to individual. Their legs are strong and study, and their hoofed feet also sport a strong dewclaw that helps with walking through deep sands and soft ground.

The Addax belongs to the genus Addax - no surprises there - and the genus belongs to the subfamily Hippotraginae which contain the Oryx (for example the gemsbok) and the Antelope (for example an impala). The Hippotraginae subfamily belongs to the Bovidae family that contains bison and cows, along with many others. Finally Bovidae is in the order Artiodactyla, which all even toed ungulates belong to, like pigs and camels. However with recent advancements in molecular studies, cetaceans may also be related to the even toed ungulates, having evolved to go back to the sea.

The Addax lives in mostly arid desert terrain that supports many of their natural food sources such leaves from low trees, grasses, and whole bushes when available. Usually during the day the Addax will dig a shallow hole and lay in it until night. As a nocturnal species their eyesight is very well adapted, as is their hearing and smell. They will usually live in herds from two to twenty two or more. However, due to their population’s decline, they do not have the numbers to support the herds that once may have numbered in the hundreds. Their feeding habits have them wander far and wide to graze, and they will usually cover an extensive area each night in search of food, as they get all their water from their food.

The social structure of most herds was and still is based on age in the larger ones. The dominant oldest male will usually be found as the leader, and its experience in finding more places to graze and also better terrain are beneficial to the herds. They are usually found with both males and females in a given herd, and both have the same horn makeup - giving females an equal advantage in self defense. Currently efforts are under way to rehabilitate the populations of the Addox in Zoo based programs, with the hope of having the same success as the European Bison, which at one time was down to twelve individuals. With the Addax still numbering over a thousand it is hoped that there is enough genetic diversity to save the species and bring it back to its natural habitats to restore ecological order.

The Addax is listed as Critically Endangered (CR), facing an extremely high risk of extinction in the wild, on the IUCN Red List of Threatened Species

Some facts about the
Addax