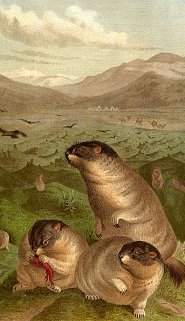 The Bobak marmot (Marmota bobak) inhabits the prairies and grassland plains of Central Asia, the Ukraine, and Russia. Also known as the steppe marmot, the animal can thrive in areas that most other species cannot such as at the outer edges of cultivated fields.

The Bobak marmot resembles the North American prairie dog. Its most notable characteristics are its round belly, short, stubby legs, and short tail. The length of a Bobak marmot is approximately 24 inches (60 cm), and the weight is around 11 pounds (5 kg). In general, the males are slightly larger than the females. The coat of this prairie dweller is short and thick with longer, darker hairs that jut out beyond the underfur. These darker hairs are prominent between the eyes and on the top of the head. The tail, underbelly, and throat is also generally darker than the rest of the body. In the fall, adult marmots are soft yellow with a dark brown topcoat. During the summer, the sun lightens the coat even more.

Young Bobak marmots feed on the female’s milk for the first couple months of life, and adult marmots feed on wild prairie grasses. Wheatgrass, knotgrass, chicory, clover, and wild oats are the typical meals of the marmot. Occasionally, marmots will graze on sunflowers, crops, and vegetable gardens. Feeding increases prior to winter hibernation and in early spring. In general, each family may have up to five adults and six young. As many as fifteen families can prosper in one square kilometer. Marmots are most active during dawn and dusk, and they spend up to sixteen hours socializing. Mating occurs in early spring, and nearly sixty percent of the females breed each year. Females also act as guards for the colonies. The guard marmot stands erect while searching for danger. If a predator nears, the guard sounds a warning call to the other marmots.

Bobak marmots are prey to foxes, wild dogs, and eagles. Marmots were once hunted for their thick pelts, however hunting and trapping have been prohibited in many regions. Bobak marmots are considered to be at low risk for endangerment. The marmot can live up to fifteen years in captivity, but its longevity decreases in the wild.

The Bobak marmot is listed as Conservation Dependent (LR/cd), the focus of a continuing taxon-specific or habitat-specific conservation programme targeted towards the taxon in question, the cessation of which would result in the taxon qualifying for one of the threatened categories below within a period of five years, on the IUCN Red List of Threatened Species

Some facts about the
Bobak marmot